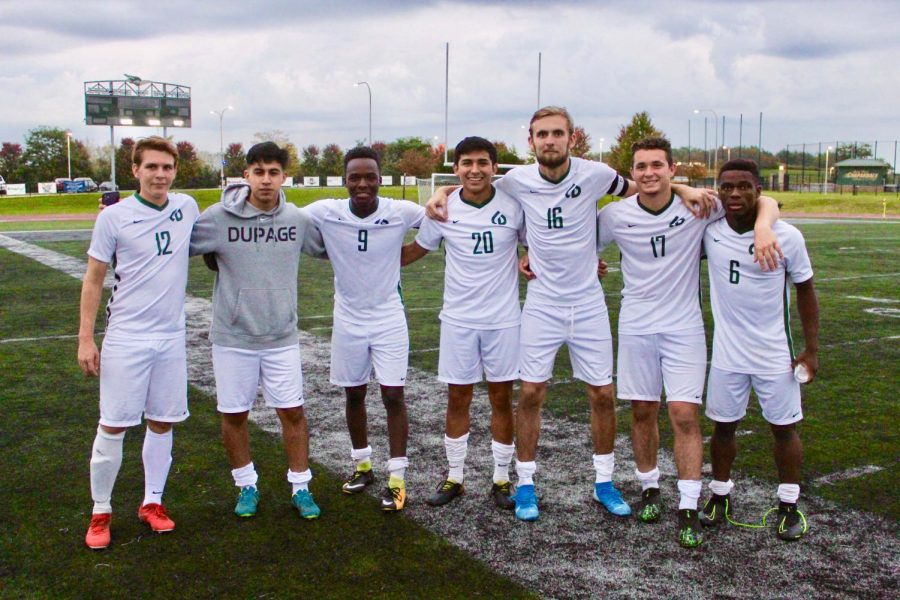 Despite gloomy conditions, the Chaparrals kept up their energy levels, scoring one goal after the next on the way to a 5-0 victory over McHenry County College in their final home game of the season.

Only a few brave fans showed up to combat the fall weather and to witness the COD men’s soccer team celebrate their fourth consecutive win. The Chaps secured the win with two goals scored in a 16-second span to improve to 6-8 overall.

Forward Sebastian Nimako was able to position himself in just the right place to score and take that leading point on the board at 1-0 in the 16th minute.

“I think as the season has gone on, even though we maybe just had a slow start, we now have built up more chemistry and, hopefully, we can keep this winning streak going.” Nimako said.

Midfielder Eduardo Gomez snapped the second goal of the game into the net. Then, only 16 seconds later, midfielder Best Emena followed with his own effort to make the score 3-0.

The Chaps continued to pour it on when forward Javier Lujan added the fourth goal, and Emena closed the game out with another goal making the final score 5-0.

Goalkeeper Mario Giase had one save in the entire game.

The rain surely didn’t stop the coaches from encouraging and supporting their players throughout the game and into the final score. Head Coach Jim Kelly said the win was another sign that the team has really come together since its early season defeats.

“Well, I think earlier in the season we were very unlucky,” Kelly said. “We had some games we could have won, probably should have won, and we made individual mistakes and gave goals away. Right now, the defenders are not making any little mistakes. When we were maybe losing 2-1, now we are winning by two points.”

Nimako agreed the team has really come together mentally during the four-game winning streak.

“When you’re playing like I’ve been playing with these guys for a while, you start to just figure things out as the season goes on and as the chemistry builds up,” he said. “I now know better what to do when certain players are moving. When he’s going down there and going around like he was, and I know where I need to be to help him out, it’s then that we score.  It was the last home game of the season, so it was good to come out to the field and get in a good win.”

The next men’s soccer game will be an away game at 1 p.m., Oct. 19, at Kennedy-King College in Chicago.