Athlete of the Week: Jessica Schoder 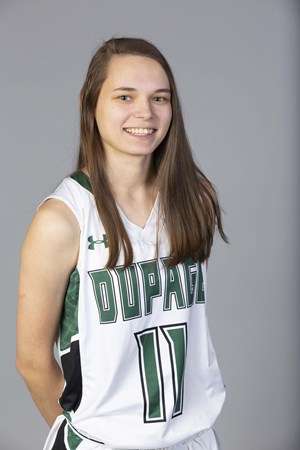 Athlete of the week: Jessica Schoder #11

Kate Zadell: When did you start playing basketball?

Jessica Schoder: I started playing for the Lisle Park District when I was about 7 years old. As soon as I hit the court, I remember thinking I want to play this as long as I possibly can. I fell in love with the sport. I noticed, “Hey, I’m pretty good at this,” and then I started playing more competitively on travel teams, club teams and through high school. When COD offered me a position to play, I couldn’t pass up the opportunity.

KZ: As team captain, what comes with the responsibility of being a leader?

JS: I’m not the same player I was my first season. I would get in my own head. One of my coaches told me, “It’s all about being resilient and getting past things because the game never stops.” There was one game where I gave up. My coach told me about my effect on my teammates, “They all look to you, and if you keep acting like this, the whole team will suffer.” That really resonated with me. From then on, I was a different player. As a sophomore, I can lead our younger players because I know how hard it can be to play at this level. If people are looking up to you, you have to present yourself as someone they will want to play like.

KZ: What goes into training for the big games?

JS: First, I usually work with our trainer because I have been battling injuries. Then, we usually watch film, either our film or film of our opposing team. We watch some of their films to see what they do, and how we can attack it or defend it. From there we go to the gym and do repetitions of our shooting drills and our defensive drills. Our coach likes to harp on the fundamentals, because if you can’t perform them during practice, then you won’t perform well in a pressure-filled game. We have lifting on certain days and have recently been doing yoga and stretching techniques. Our coach (Denise McCance) hired a second assistant coach (Kim Wallner), and she’s all about us taking care of our bodies. She is very energetic and passionate about basketball. We’re now doing a cool down stretch after games and workouts. Any sport should have a cool down therapy, because after your body has worked so hard, it’s good to stretch out the muscles you’ve been working on.

KZ: What drills do you enjoy the most?

JS: We’ll do a game(s) called popsicle, 3up, or 60 shots. The coaches put us in teams, and we compete against each other. It makes practice really fun while also getting a lot of shooting in.

KZ: Have you dealt with any injuries?

JS: I had to sit out a game once this season because my shin splint had gotten so bad. It had gotten to the point where my trainer recommended I don’t play. Sitting on the bench knowing you can’t do anything but communicate is hard because you want to help your team. I’ve never broken a bone…[we both knock on the wood table we’re sitting at.]

KZ: What does the intensity of a game feel like?

JS: When the adrenaline kicks in, everything just zeros out. My friends and my mom say, “Did you hear me yelling on the sidelines?” And I have to say, “No,” because when I’m on the court, I don’t hear the outside. There is a concept in sports psychology called “Flow.” It’s when you are so focused on something, and it’s a very natural state, things just happen in a rhythm you don’t even have to think about it. It’s just an automatic go.

KZ: What commitment does the game take?

JS: It’s a lot of time commitment when you get to this level. You have to be great because of how good this generation is. These younger girls are crazy good, and you’re like, “I don’t remember being that good when I was that age.”

KZ: How did the probation affect you last year?

JS: I was not on the team at the time, but I helped out in practices, and there was a lot of talk of how they weren’t allowed to play.

KZ: Do you feel like the awareness of concussions is playing a part in how the future of sports is developing?

JS: Definitely, more so with football, because that is more contact heavy, where you are getting hit more in the head and the whiplash associated with those effects. In basketball, if you hit the floor the wrong way or an elbow hits you, you might need to be tested. Doctors are really looking at the signs and symptoms of concussions, so they know how long to keep you out. Here at COD, we all have to take concussion tests before the season starts, so if we do get one, when we take the test again, they know for sure because the test results will differ.

KZ: What are your academic goals at COD?

JS: At COD I really figured out what I wanted to do. My freshman year I went to Arizona State University not really knowing what I wanted to do. So, I came back here, took some classes, got my associates and realized I loved accounting. This year I am getting certificates: three in management and one in accounting. After COD, I will return to Arizona State to get my bachelor degree in accounting.

KZ: Who has been your biggest supporter?

JS: My mom is a big supporter of what I do, and she always keeps me motivated. She keeps me on track, and seeing how giving and selfless she is to other people makes me want to be better. She definitely instills a lot of great values in me. As I get older, that’s how I want to be. In sports, I really look up to the U.S. Women’s National Soccer Team because they are such huge advocates for equality of women’s rights in sports, because it’s such a man’s dominated world. It’s hard that women don’t get treated the same. Their fight for equality is very inspiring.

KZ: How did the tragic loss of Kobe Bryant and his daughter Gianna affect you?

JS: It really hit hard because he was such a great player and an advocate for women’s sports, especially the WNBA. That’s amazing because WNBA games aren’t televised as much as NBA games, but the women are just as talented. He was so passionate, especially with his Gianna, who was going to play for UConn. She was a great talent; it’s heartbreaking.

Favorite Quote: “Hustle makes up for many a mistake,” by John Wooden. If you did your best, you can walk off the court with your head held high. My freshman season, we were blown out by this one team, and then we played them again in playoffs, and it was a complete transformation. After the game, their athletic director came up to us and said, “Your girls never gave up, there was a complete transformation from when we played you the first time.” It felt amazing.