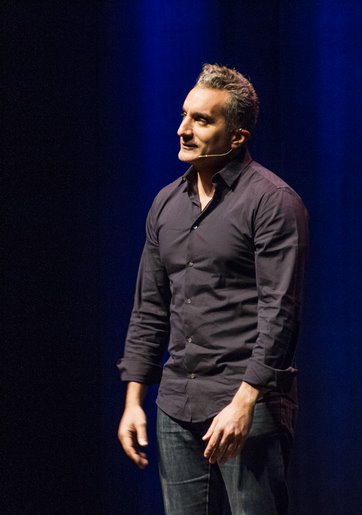 Bassem Youssef performs his political satire routine before a sold-out theater at College of DuPage on Oct. 19

Turning his back to the laughter, Egyptian satirist Bassem Youssef stepped into darkness. Positioned behind a solitary table, the stage was dimly lit to mimic the room where former Egyptian President Mohamed Morsi’s regime interrogated the arrested comedian.

Parsing the jovial atmosphere, a wave of silence and seriousness swept over the crowd. And suddenly, with his wry and characteristic, impish grin, Youssef brought back the light with humor.

Performing before College of DuPage’s Belushi Performance Hall on Oct. 19, Youssef’s material shed light on his struggles as an Arab immigrant in America and his experiences in Egypt using a popular satirical show to unite people against tyranny following the 2011 Arab spring.

Promoting his book, “Revolution for Dummies: Laughing Through the Arab Spring,” Youssef’s raucous comedy remained persistent, yet his disposition for defiance seemed to come and go in waves. Behind every joke, behind every laugh, the reality of Egypt seemed to arrest his attention.

Now living in the shadow of Saudi reporter Jamal Khashoggi’s murder by the Saudi regime he criticized, one can grasp the severity of Youssef’s situation. His story represents the struggle for press freedom across the Middle East.

His voice in Egypt was silenced. Youssef is a comedian in exile.

“When I was arrested under the Muslim Brotherhood and brought to the interrogation room, I was the one in power,” replied Youssef to questions from the audience. “The power of the street was stronger than the regime. But now, the military regime is brutal. I’m scared to go back to Egypt. I fear if I step foot in an Egyptian airport, I would be arrested and nobody in the Western world would care.”

As power in Egypt shifted hands, one form of media propaganda was exchanged for another. Youssef launched Al-Bernameg, a political satire show modeled after Jon Stewart’s “The Daily Show.” Mocking Morsi’s Muslim Brotherhood regime, the show became the most popular in Egyptian history. One-third of the country’s 90 million citizens became avid viewers. When Morsi was ousted by a military coup instigated by General Abdel el-Sisi, political pressure silenced Youssef’s show.

“Both Muslims and Christians suffered under Morsi’s regime,” she said. “For Sisi to step in was like a miracle for everyone. People were not living. The only thing that helped us survive under Morsi’s regime was Youssef’s show. The satire unified us as families and unified us on social media. If it weren’t for his show, Morsi would still be president.”

Member Anthony Saeed added, “Just by watching (Al-Bernameg), people felt empowered in fighting against the government. Obviously, other ways besides satire are more effective, but watching the show was enough to signify an uprising amongst the people.”

Youssef told the audience the Muslim Brotherhood’s lack of mass support is what enabled him to get away with his show for so long. When he was arrested for insulting Morsi, he faced his captors with a triumphant, mocking spirit.

“The military is revered by the public and more sacred than religion. It’s dangerous. The show would not be valid now. The regime bought weapons from all the Western powers, and now the democracy-loving countries are turning away from what’s happening. (If I was arrested), would they care about one person when the regime is buying billions in arms?”

In an interview after his performance, Youssef discussed America’s fear of a destabilizing power-vacuum if they end their intervention policies in the region.

“When everyone wanted Bashar al-Assad out in Syria, he released the Kraken, the radical Islamists. Everyone felt they had to support the Assad regime or there would be a catastrophe. America has been supporting dictators for decades and now must deal with the consequences of their actions.”

In the last column Khashoggi wrote for the Washington Post before he went missing, he decried the state of press freedom in the Middle East. On Oct. 2, his dismembered body was covertly removed from the Saudi consulate in Turkey after a premeditated murder forever silenced his voice of dissent. Hope for justice has been leveled by Trump’s preference to protect Saudi business interests at any cost.

“A state-run narrative dominates the public psyche, and while many do not believe it, a large majority of the population falls victim to this false narrative,” Khashoggi wrote.

Youssef discussed with the crowd the demoralizing effects such propaganda carries.

“One of the biggest myths dictatorships have indoctrinated people with is, democracy will lead to chaos because the country cannot deal with difference in opinion. Military dictatorships pose to the West as seculars opposed to radical Islamists, but most radical movements are allowed to exist by the military because they help kill out any liberal narrative or attempt at real democracy.”

Youssef believes environments where religion is used as a suppressive tool naturally direct people into supporting strongmen and authoritarianism.

Coptic Youth member Michael Halim said, “The (Egyptian) government controls the media and what they allow the people to see. It is highly censored. Often they give mandated stories to networks who must cover them without going off-script.”

Saeed said many consider Sisi a hero for taking power from Morsi. To Sisi’s supporters, the revolution did not fail.

In his last column, Khashoggi described Arab regimes as surviving by suppressing free thought and manipulating public opinion. He described their silencing tactics as increasing with impunity.

Depicting the hope of the Arab spring becoming asphyxiated, he detailed their aspirations of emancipation quickly dissipating into greater tyranny.

Youssef embodied this disdainful spirit, telling the audience, “You had people coming in from off the street and watching (my) show. An exiled show online would lack the same energy. People think the show is their savior. They just want the show so they can feel better about themselves and feel they did their patriotic duty to support democracy. It doesn’t work that way. Now people can’t do anything, so why do you think a show can make a difference?”

Youssef appeared defeated and distraught by the military’s suffocating regime. Often becoming pessimistic about Egypt’s future, he answered the ultimate question with an air of defiance. When asked what difference the failed revolution made, Youssef said the democratic ideals hundreds died for live on in the hopes of the youth.

“A revolution is not an event; it’s a long-term process. Now we have younger generations that are not like their parents; they are open and are questioning everything, especially religious and military authority. This is why I have hope. The seeds have been planted. It’s inevitable something will happen, the only question is when.”

Arriving in America in the most prodigious time, Youssef explained his determined role as an Arab immigrant.

“My concern is to get acknowledged and to have a foothold in the media to represent my people. Right now, more than ever, we need people to speak up for us.”

“We’ve seen a lot of racism against immigrants who often have to learn a new language and are just trying to find a better life for themselves and their families. (Youssef) stressed stereotypes we face associated with terrorism. I don’t want people to feel like they are in danger around me just because I wear my headscarf.”

Recounting his experiences in Egypt, Youssef discussed with me the responsibility the public has in holding media sources accountable.

“In a free society, the public has the power to either improve or destroy media sales. If you find a source ceases to be credible, people should hurt them financially so they cannot survive.”

He believes the entertainment-orientated programming exemplified during Trump’s presidential campaign is inevitable with a free media. He said business decisions to turn away from informative coverage hurts democracy.

Addressing Trump’s attacks on the media, Youssef placed the president’s rhetoric in perspective.

“You can worry when articles start being redacted, or when people start losing their jobs for saying what they believe in. We are currently seeing people lose their jobs more through public pressure than government intimidation.”

Endeavouring to break his perspective into the American audience, Youssef ran a show called “Democracy Handbook” on Fusion and has recently launched his “Remade in America” podcast.

“Satire brings more people to the table to discuss ideas and issues that might otherwise be off-limits,” said Youssef. “This helps spread awareness of what’s really going on.”

He has often paralleled his coverage of Egyptian politics with American tendencies to vote inspired by emotion rather than reason.

“Some people don’t care about the facts, they will vote on ideologies and emotions no matter what. It’s a form of tribalism. We must try to show the facts as much as possible and spread awareness. You need to gather support to defeat this type of tribalism.”

When covering the 2016 presidential election, Youssef detailed the increasing division between right and left politicians. He reported voters abandoning the common middle-ground.

Echoing his sentiments, Coptic Youth member Ledia Bebawy stressed, “Because voters are choosing from polar opposites, people feel the need to only vote either Democrat or Republican. Nobody listens to all the policies because they feel they belong to only one side or the other.”

After asking students about the midterm elections, a growing political indifference has been noted. Concern for policies like Trump’s travel ban has not translated into an inclination to vote. Those spoken to have conveyed skepticism their vote can make a difference.

Picturing Youssef confined behind the stage’s darkness, you realize the courage it takes to face tyranny with a laugh. Satire is a testament to the democratic responsibilities we have to ensure the freedoms of our next generation do not slip away.

The life of Jamal Khashoggi shows us liberty is not to be taken lightly. It takes vigilance and constant determination to protect the rights of all those around us.

“The freedom to make jokes isn’t going to change anything in this administration,” said Youssef, before erupting with his often yelled refrain. “If you want to make a real difference, go vote!”