Will quantum computers revolutionize the world? 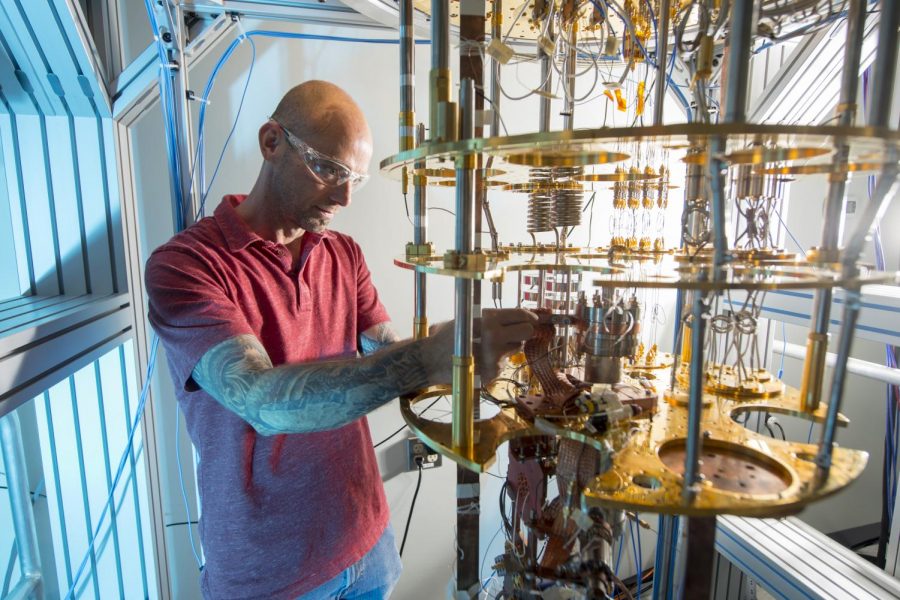 If you threw an encyclopedia to be devoured by a black hole, could you ever retrieve its information back again?

Even with today’s most powerful supercomputers, there are limitations to the complexity of possible calculations, preventing us from understanding some of the greatest mysteries in particle physics.

In an attempt to bridge the divide, Google LLC claims to have achieved “quantum supremacy,” using a quantum computer to perform a calculation in 200 seconds it would take the largest supercomputer 10,000 years to complete. Even though industry competitors like IBM dispute Google’s claim, no one disputes the future lies in quantum computing.

Jim Kowalkowski transitioned to quantum computing at Fermilab National Laboratory in Batavia, Il. because of the exciting new ways it challenges researchers to think. Fermilab is run by the U.S. Department of Energy, specializing in high-energy particle physics. As part of a national initiative, federal funding has fueled research into quantum computing as part of the lab’s Quantum Science Program.

After the recent headlines, Kowalkowski was surprised to receive calls from people who never inquire about science. He said Fermilab is not in the process of building a quantum computer, but rather performing physics experiments using different quantum apparatuses to lay the groundwork for the future.

“On a regular computer, information bits are in a determinant state of on or off, one or zero,” said Kowalkowski. “On a quantum computer, a ‘qubit’ is quantum mechanical and can exist in both states until you observe it. These silicon qubits square the magnitude of how many states you can represent. (However,) current technology has limitations to how many qubits can be added and how big a problem they can solve. Right now, 53 qubits, (number in Google and IBM’s quantum computers) isn’t big enough to compute the harder problems. Over the next decade, there needs to be a breakthrough in materials science. There’s a lot of research to do before we get there.”

Kowalkowski said a dilution refrigerator is used to cool the superconducting qubits to near absolute zero. There’s a chip located in the bottom containing harmonic oscillators. Using classical computing methods of communication, specific radio frequencies are sent into the chip resulting in the creation of artificial particles because of the quantum principle of particle-wave duality. This establishes temporary artificial atoms.

“Unlike a traditional computer, these are probabilistic machines,” said Kowalkowski. “You have to establish the state over and over again to derive the answers from a large statistical sample. In the next two years, it would be fantastic having a hardware system to create qubits with SRF cavities allowing us to measure increases in how long a state lasts and how long of a calculation we can operate.”

Steve Mrenna is a particle physicist at Fermilab who sees quantum computing research as an exciting new opportunity. He believes the limitations of classical computers are a hindrance to solving the more difficult and fascinating problems.

“The power of our lab is the ability to bring together people of different skill sets to solve difficult problems of common interests,” said Mrenna. “A lot of other people in quantum computing work on problems that are more esoteric (toy problems) in interest. We have real problems that we’re trying to solve to help us understand something about nature. We are still figuring out how to set up quantum computers to solve these problems.”

Mrenna said quantum computing can provide breakthroughs both inside and outside the field of physics. The stronger computing power is predicted to help create new medicines as quantum chemists use quantum mechanics to better understand and synthesize molecules. Cryptologists and those in cybersecurity also endeavour to use quantum computers to create encrypted messages that cannot be hacked. Because of the properties of quantum mechanics, once you measure something, the wave function collapses and the coded information is changed or lost.

“What we are currently doing is optimization problems,” said Mrenna. “What’s the best way to do something? What’s the minimum energy you would produce by putting things together? Quantum computers give the hope you can solve these problems that appear impossible with classical computers. The goal is to eventually work on quantum mechanical problems like the Schrodinger equation which is seen as the key to understanding quantum mechanical behavior. Better understanding particle wave duality will help calculate what happens when you collide together protons, like at the Large Hadron Collider in Switzerland.”

Mrenna said they can currently solve the problems they are looking at better with classical methods, but each solution is a stepping stone to progressing quantum computations towards currently unsolvable problems.

Kowalkowski said the strength in quantum computers over supercomputers comes in their systems approach to solving problems of multi-faceted inputs. This is because qubits are synchronized utilizing the quantum principle of entanglement.

“Quantum entanglement means you are establishing an intimate relationship between particles, so when you manipulate one part, it has a global effect on the entire system at once,” said Kowalkowski. “When solving a problem, you take the machine and put its bunch of particles in the state you desire. Then by manipulating them through magnetic fields or radio frequency pulses, the entire system is affected. When you’re manipulating a state all at once, it requires a different programming model altogether.”

“Industry wants to be able to utilize this because scheduling and computing with multiple interactive factors is really difficult,” continued Kowalkowski. “We’ve been working on routing a (hypothetical) traveling salesman through multiple cities while trying to maximize profit and efficiency. With traditional computers doing one manipulation at a time, the increasing number of factors makes the problem almost unsolvable. However, with a small number of qubits, you can represent this complex system. By manipulating the whole state and turning the information into a global problem, you get your solution.”

Mrenna said the basic idea of entanglement is some problems have more than one solution. Quantum mechanics tells us the solution is a mixture of the two. One of Fermilab’s goals is to one day “teleport” entangled photons between the lab and Argonne National Laboratory 30 miles away in Lemont along underground fiber optic cables. This will enable the communication of information between two distant objects like the direction of a twin magnets located at each lab. Researchers are currently teleporting entangled photons across buildings at Fermilab. Separation of entangled photons must be done very carefully to maintain the coherent state.

Because of qubits’ extreme precision, they are very vulnerable to environmental interference. Sound disturbances are removed from the dilution refrigerator as best as possible, but quantum computers still need to operate the same calculation multiple times to identify and quantify impacted solutions. A quirk of this sensitivity is the ability of researchers to detect incredibly fine variations in environmental pressure and temperature. Another side-effect is the system’s ability to detect and measure dark matter particle interference. This detection can help explore questions physicists have about the mysterious dark matter which constitutes 27 percent of the Universe compared to normal observable matter’s 5 percent.

Mrenna said the quantum computing field is so exciting because they are developing new machinery and using tools they’ve never been introduced to.

“When a science field is new, there’s an opportunity to really contribute something foundational to the science,” said Mrenna. “If you enter a field that’s well-established, it’s harder to carve out your niche. Someday, the technology will allow us to harness quantum computer’s full potential. Growing up, it seemed like particle physics was the coolest thing out there. It was the biggest questions, with the biggest ideas. Finding the hardest problems to solve has been a drive all throughout my life. If it’s not the hardest problem, why go after it?”