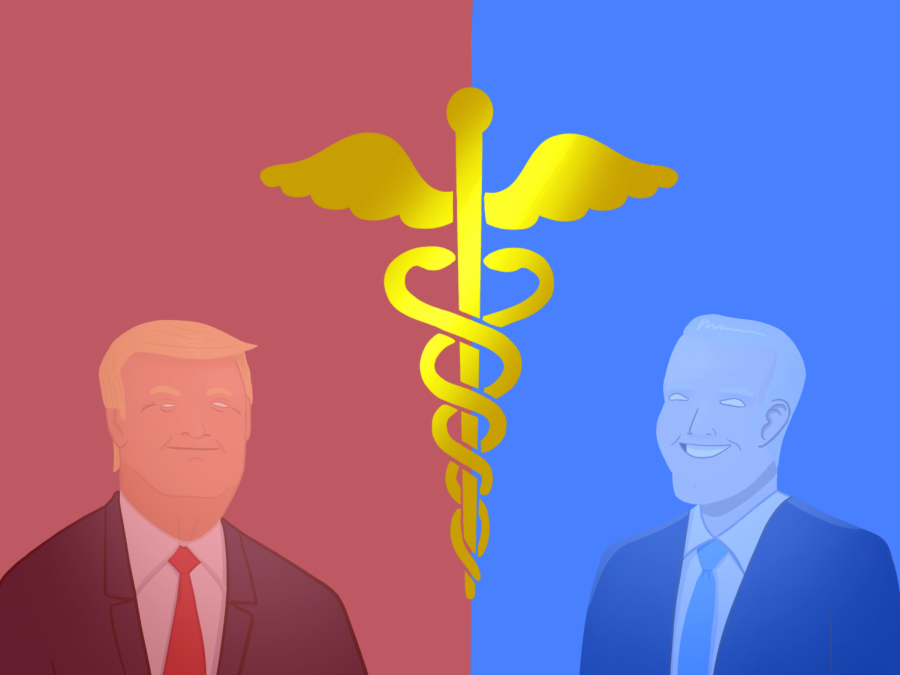 President Donald Trump and former Vice President Joe Biden are now at the culmination of the 2020 presidential election—what seems to many, as one of the most profound elections in our modern-day history, considering the social, fiscal and societal implications of this year alone. Voting demands participation, not only at the polls, but through close evaluation of the candidates. In the past weeks, the Courier has analyzed the economic and immigration policies of the two candidates.

This third and final part looks at the health care approaches of Biden and Trump, with specific attention to the Affordable Care Act.

In 2010, the Obama Administration, for which Joe Biden served as vice president, passed the Affordable Care Act, also known as Obamacare. Through this, some people could qualify for a decrease in their health insurance costs and became protected from a denial of coverage because of pre-existing conditions. It also enabled individuals to stay protected on their parents’ health insurance through age 26.

Biden, through the Obama administration, was trying to come up with a way to expand healthcare to more than 40 million uninsured Americans at the time. They aimed to make healthcare insurance accessible to them, but also to do so within the confines of a market system, rather than a single-payer system. This gave more people health insurance but maintained the private and employer-based insurance systems the majority of Americans received coverage through.

Prior to the Affordable Care Act’s protections for people with pre-existing conditions, sick people were often denied coverage or subject to a lifetime cap on the number of insurance benefits they could receive. Chronic or catastrophic illnesses—e.g. mental illness, cancer, etc.—often fueled crushing debt and personal bankruptcies.

Biden vows to maintain and expand the Affordable Care Act. Throughout the duration of his campaign, specifically in the primaries, he set himself apart from his Democratic opponents by opposing a single-payer tax system. Biden has rejected the elimination of private insurance. Instead, Biden aims to make the healthcare system more easily accessible by reducing costs and making it more navigable.

In one of his main focuses, Biden says that there will be a system where individuals can have a choice in their coverage. This could mean through an employer, an insurance company, or to just go without any coverage. Additionally, Biden will give protection to residents of states that do not accept the expansion in Medicaid by offering access to Medicare-like public option, with no premium charge.

In contrast, Trump has been vocal about both his opposition to the ACA and his intention to overturn it, which will be heard by the Supreme Court on Nov. 10.

Trump and the Republican Party already eliminated the individual mandate provision in the Affordable Care Act. Every person making enough money to be required to file federal income taxes (about $10,400 for an individual in 2017) had to have insurance, and if they did not, they had to pay a fine of nearly $700. Those with higher incomes and no insurance had to pay larger fines. The money generated from the fine was used to help pay for health insurance. If premiums are all being paid, especially by healthy people, the costs for other people who have chronic illnesses or are older are reduced. In the courts, however, this was ruled as unconstitutional because congress said there was no authority to do that.

Although Trump intends on eliminating the act, he has said he will make efforts to keep the provision that protects against an increase in premiums or a denial of coverage for those with pre-existing conditions. However, this will still leave tens of millions of Americans with no insurance, according to the Economic Policy Institute.

If the Trump administration wanted to keep that single part, while eliminating the rest of the ACA, Congress would need a new law that would say insurers cannot kick people off insurance because of pre-existing conditions, which, then, may or may not be passed.

“If you have tens of millions of people who don’t have health insurance, they are still going to go to the emergency room. That drives up the costs for everyone else. They are still going to get sick, and if they don’t have health insurance and can’t get medication, they just get sicker, and then it is going to get a lot more expensive when they do go to the doctor.”

Republicans criticize the ACA as government overreach. There was Republican opposition to the bill from the beginning, before Trump, which looked to the market to try to expand health insurance, rather than government order. In general, the Republican party argues that more free-market solutions, or more competition between insurance companies, is a better solution to insurance costs than government intervention.

“A lot of it does come down to this ideological issue of whether or not you think you would rather have the government involved in this,” Goldberg said. “Because otherwise you would have tens of millions of people uninsured, and that is a problem for the country. Or whether you think the government involvement is going to cause more problems, and if you just let the free-market fix it.”

“That really divides Biden voters and Trump voters,” Goldberg continued. “Among those Democratic voters, they are divided by how much government involvement there should be. But, at its core it comes down to Biden voters are going to say, ‘Health insurance is a huge issue; someone has to do something. Let’s have the government try to fix this.’ Trump supporters are going to say, ‘We think that is going to create more problems, let’s not do that.’ It ultimately comes down to how comfortable or uncomfortable people are with the role of government in people’s lives.”

More information on their healthcare approaches: