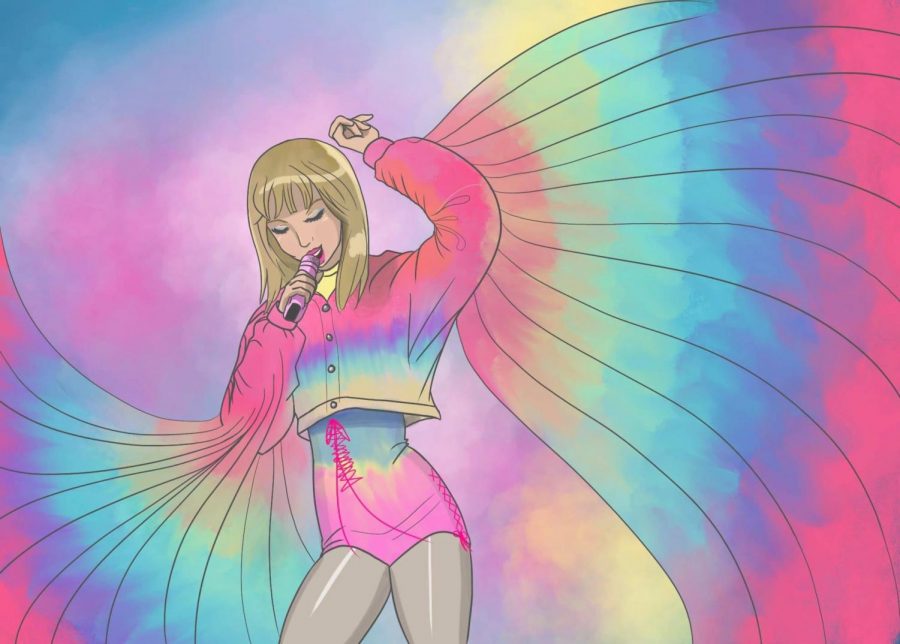 Taylor Swift has added her seventh album to her life’s soundtrack with “Lover.” The pastel album art, with Swift sporting a glitter heart around her eye, gives a clear idea of what the album is about –  Love. A stark contrast from “Reputation,” released in 2017, I was definitely curious, what would Swift do next?

From the record breaking album sales and high grossing stadium tour, how could she top this? While the beginning of the “Reputation” album was moody and dark, it is almost as if Swift gave people a taste of “Lover,” with tracks like “Delicate” and “Getaway Car.” “Lover,” with 18 tracks, the most that Swift has ever had on one album, is reminiscent of her older work. This is a good thing. It gives fans a nostalgic feeling. The entire album has a very happy tone about it, to suggest that Swift has finally found “the one.”

The first track on “Lover” gives a salute to the “Reputation” era, with “I Forgot That You Existed.” This fun, poppy track gives listeners the idea: Swift is moving on from the drama/snakes. As she sings, “it isn’t love; it isn’t hate; it’s just indifference.”

Followed by “Cruel Summer,” with a vibe that reminds me of “1989,” my personal favorite from Swift’s discography is a track that chronicles a time of sneaking in through garden gates, crying on the way home from the bar and a new love.

“Lover,” the title track, is a beautiful, swaying ballad produced by both Swift and Jack Antonoff. This song has Swift’s trademark lyrics with a bridge that sounds like wedding vows and Antonoff’s signature production. Antonoff is most known for being the lead singer in “Bleachers,” and formerly a guitarist/drummer in the indie band “Fun.”  It’s a beautiful song that makes me want to find the love of my life, to be honest.

Next are “The Man,” and “Miss Americana and the Heartbreak Prince,” which both tackled topics of gender inequality and the current state of the American political system from the perspective of a high school (genius, honestly.)

“Death by a Thousand Cuts” is another track that portrays the ups and downs of love This song, another one of my favorites, is based on the Netflix movie “Something Great.” According to Netflix, the film is about a music journalist who is dumped by a long time boyfriend and goes on a trip to New York with her friends. With lyrics like, “I see you everywhere, the only thing we share is this small town,” and “If the story is over, why am I still writing pages.” This song is beautifully produced.

Song’s like “Soon You’ll get Better,” featuring Dixie Chicks and “London Boy” show two very different types of love. One that is about someone close battling illness, to a cute pop anthem that illustrates a love for someone from “across the pond.”

Overall, this album ties all the complex ups and downs in Swift’s life and many others into a neat bow, with the final track of “Daylight.” Thinking of all the bad and hurtful aspects of life, Swift sings, “Step into the Daylight, and let it go.”