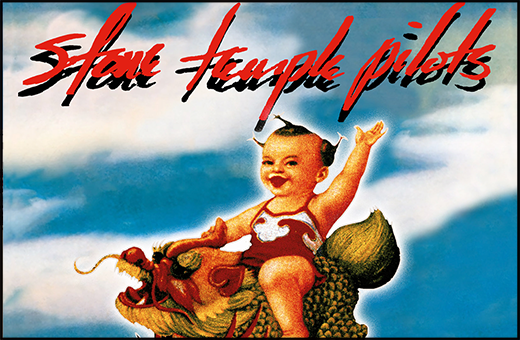 To honor their June 1994 album, the Stone Temple Pilots (STP) performed “Purple,” their second album, during their 26th anniversary livestream. The livestream gave recognition and honored Scott Weiland, the band’s former bandmate and frontman. Overall, the performance despite the integrity and style of the great Scott Weiland was entertaining to say the least. It wasn’t anything crazy such as Lamb of God or Metallica with high energy and heavier riffs, but the artists themselves were able to project their own sound and chiasma that resembled the greatness STP had to offer in both the past and even today. Each artist plays their roles in creating a performance set out to honor the name of STP as well as its deceased original frontman.

The 90s brought an era of music that changed the hearts and minds of music fans forever. The decade brought sounds and bands that helped change the face, style and sound of alternative rock music. The grunge era was at its biggest, as it set the path for hard riffs and dark lyrics pertaining to depression, loss and destruction. Grunge was a sound right for the time and the generation who was a part of it.

Although their sound related to the early 90s grunge movement, STP brought softness and emotion connecting with the deep and interpersonal struggles their former bandmate and frontman, Scott Weilan was facing. In December 2015, Weiland’s demons got the better of him. His years of nonstop drug and alcohol abuse led Weiland to a path of destruction, chaos and ultimately his death by an accidental drug overdose.

Weiland’s death shocked his bandmates, but they moved forward and were able to find a singer that showed the right attitude and personality to play the role of the band’s frontman- Jeff Gutt. Gutt’s voice behind the mic shows intensity and connection with the songs and their impact on a creative and immersive level.

Weiland’s shoes are hard to fill, but Gutt’s performance showed he is worthy of carrying on the band’s legacy. His charismatic character and presence for each song rekindled memories of Weiland’s onstage performance and devotion as a frontman. Despite Gutt’s thrilling and invested performance, the band will never sound or look the same without Weiland. Weiland, who was also a key member of super bands Velvet Revolver and Art of Anarchy, can’t be duplicated.

Guitarist Dean Delos brought riffs that projected the sound and style that was the hallmark of 90s alternative rock.His riffs showed the raw and rock hard sound that STP brought back in the day and even now. Delos riffs only strengthened the bands integrity and structure in the performance bringing a layered sound of guitar work that projected the raw, hard hitting attitude STP brings to the world of music. As a former member since 1989 Deleo showed that even after this time he can still express his talent and skill with the guitar. Whether its playing an opening riff composed of smooth blues like sound or heavy riff, Deleo doesn’t disappoint and only draws the viewer closer into his passion and admiration for the instrument. Regardless of his older age Deleo proves in his performance that he can still rock hard with his daring yet boldly innovative guitar work creating nostalgia for fans who knew the band and truly understood their work as creative individuals both musically and artistically.

Bassist Robert Deleo, brought a unique and daring sound that allowed for systematic structure and deep projecting of sound to be heard and further admired. His forward exerted bassline was able to provide a background beat for the guitarist to follow further providing an overarching support related to the overall sound. His lowered-sounding instrument only personifies the bands musical direction further playing a major role in the succession of the bands ability to play and express their creative outlet referring to the sound of the music they present.

Eric Kert’s drums provided rhythms that connected with the sound of the other instruments further giving structure and allowing for perfect timing in between the starting points of every song. His drums were the core as any band instrument that brought out the main rhythm giving everyone else correct timing going from song to song. The drums were one the biggest key components relating to the bands style creating the formation of each instrument defining each members role as a vital importance relaying to their sound and correlation thus making a signature sound only presented by STP.

The impact that every member brought exemplified what STP stood for in music. Their grungy yet melodic sound showed the bands formation as each instrument matched perfectly with the next. Many of the songs written by Weiland represented his struggles and emotional state he was in at the time of making this album. It’s sad to hear these songs now and not think of Scott. I would think the rest of the band members would agree as he brought a fire that ignited the stage compared to any of the other frontmen during the era of grunge. As the grunge sound of the 90s represented a depressive and saddened emotional state, STP used this but was also able to see the beauty behind all the sadness. They were the band that saw the darkness as well as the light and this is reflected amongst the songs of this album.

Regardless of their age, the band was able to show fans and music lovers alike that their sound was still alive and powerful. The Los Angeles Times review of the album in 94 compares its differentiated sound to grunge. The Times states “ The Southern California band’s cohesive sophomore outing should eradicate references to its “Seattle” sound.” I would agree with this state as this album tries to diverge away from what was being expressed with grunge and further devotes itself to emotion and inner darkness, two attributes related amongst the band’s original singer.

The album itself showed a twisted yet artful side to the band bringing in hard emotion while showing a softer more intimate look at the band’s sound. This is done in a metaphorical sense for the listener to further understand and interpret as they can get a sense of the different vibe STP was looking to create and how they wanted a different approach further investing into a new sound getting away from the grunge scene that was taking over the nation during the early to mid 90s.

Besides the tracks performed themselves, band members were able to share audio recordings of facts about each song and the impact they had within each band member on a personal and intimate level. I thought these little segments were interesting and provided a great way for fans to understand the album while showing a deeper interpretation of its impact by the artists who created it themselves. There were even stories shared mostly about Scott and how he wrote most of the tracks on this album. One of the stories from my best recollection was about Scott. I don’t know which member was speaking but the story was that for most of the lyrics Scott wouldn’t have them ready till a certain time in the afternoon. He either wouldn’t have the lyrics or wouldn’t be able to jam till 5:00 each afternoon due to his non stop partying but when he did give lyrics they were thoughtful and incorporated into the overall emotion giving the album further inspiration to be thoughtful and provocative.

It showed the band’s humanity and aching pain due to the loss of their friend and bandmate who had brought the band popularity and ultimate success within the world of music. I liked how certain songs brought sounds and emotions different from each other. This in turn was the creation of a diverse and thought provoking album that allowed for differentiation both creatively and musically. For example, you have songs such as “Meatplow,” the album’s opening track, that starts off strong with heavy layered riffs that don’t shy away from the band’s raw and grimy sound. “Unglued,” as it pertains to fast-paced guitar work is another example of this grimy sound, giving a representation of the band’s hard hitting style and musical direction .

You also have songs that combat this fast-paced and heavy sound, such as “Big Empty” and “Pretty Penny,” that provide a more melodic and peaceful sound unrelated to the heaviness the band represents overall. Pretty Penny was the most experimental of all the tracks, it provided acoustic guitars along with instruments such as hand drums, tambourines, and chimes as a way to show a diverse yet different sound to the band’s core atmosphere and projection. I think this differentiation with sound and instruments brings both creative genius and diversity amongst the structure and sound the band is trying to project. It’s nice to hear a change amongst sound so that not every song sounds the same, creating investment and intrigue for the listener.

My top 3 tracks from this live presentation were “Interstate Love Song,” “Vasoline,” and “Big Empty.” Big Empty’s opening riff is smooth but intriguing. It has a blues music feel along with a soft-paced, yet innovative and surreal, sound that doesn’t shy away from the band’s creativity. “Vasoline,” the band’s second-biggest hit off this album gave us a fast, yet hard-sounding riff, showing us the heavy sound STP brings and a great example of how their sound differs from other bands that were part of the era of grunge in the 90s. “Interstate Love Song” is the hit single off this album. It’s easily the band’s best-known and most-beloved track. I love how the song starts off slow and melodic but increases in a surprising18 seconds.

This livestream showed me STP is a band that can still put on a solid performance with music that will forever be respected and admired by both myself and fans alike who have come to appreciate the impact the band has created. The band wanted to create this livestream to give appreciation and celebrate one of their biggest achievements as well as provide a legacy to honor the great Scott Weiland. The stream was a way for fans to reflect and honor Scott’s role in the band by hearing some of the band’s finest and musically inclusive pieces of art.

R.I.P. Scott. Your music and artistic genius will forever be loved and remembered.