Humanizing the faces behind the Syrian Civil War: Part II of II 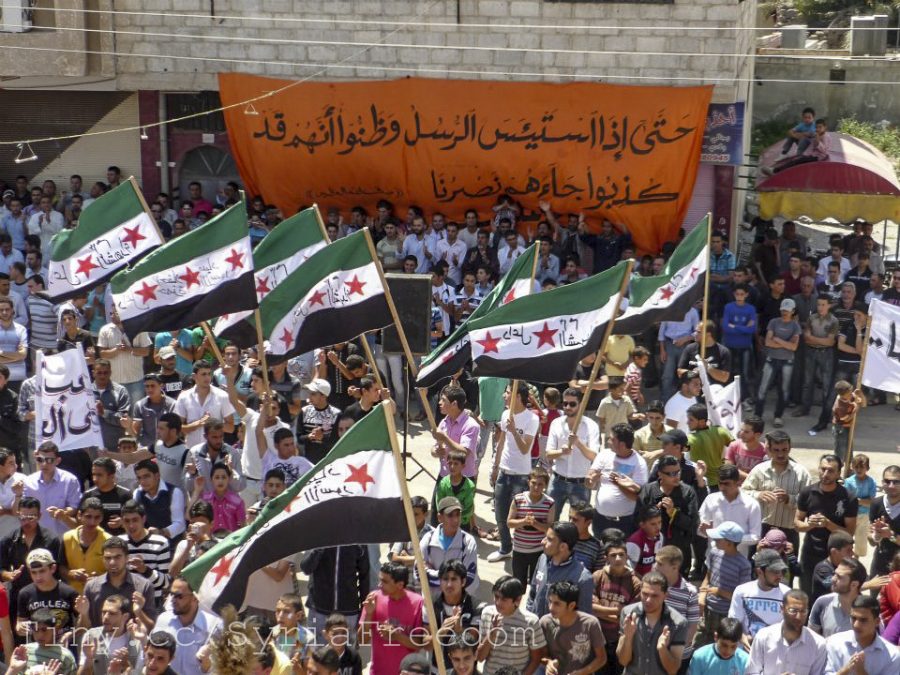 “I did not know my father had been arrested by the regime, until the revolution began, and my aunts and cousins started to flee the country.”

Anas Abdulrazzak’s family has seen first-hand the inhumanity and brutality perpetrated by the Assad regime against the Syrian people.

“Hafez killed 40,000 people, including my grandfather on my father’s side. My grandfather had nothing to do with politics; he was just an average farmer. During Hafez’s reign in the 80’s, my father and some of my uncles were tortured in prison by the army. At the time, my father was enlisted in the national army. Yet, they were arrested and tortured. When finally released, they were forced to publicly pledge devotion to the regime in the middle of Hama. They were required to say they were willing to sacrifice their lives in the name of the regime. Any way to debase your dignity or humanity was used as a tool by the regime,” explained Abdulrazzak.

Seven years into the devastating Syrian Civil War, Bashar continues to exemplify his father’s tactics of brutality against his own people to consolidate all power and suppress any dissidence.

Trying to maintain any normal daily life for the Syrian people has become impossible. “In the regime-controlled land, people live in constant fear and must always show absolute loyalty for Assad, no matter their political beliefs,” Abdulrazzak said.

“In the liberated, rebel-controlled areas, Assad has used the tactic of besieging and starving its citizens. Food, water and medical supplies can’t get in. People are debased to eating cats and chewing leaves from the ground to survive. This is what happened in Eastern Ghouta. They were circled, trapped and hit from above. The people were given two choices: either pledge allegiance to Assad, or be forced to leave the country. This also happened in Aleppo where the citizens refused to support Assad, so they were forced out of their homes to northern places under Turkish control.

“From the first day of the revolution, people knew there was no going back. The regime is built upon revenging, and being killed for freedom is not worse than being captured and tortured in Assad’s prisons. There is no living with the constant fear of persecution and imprisonment. It is too dangerous for you and your family to continue living that way. They must fight on.”

Such determination and perseverance shown by the rebels has proven negotiating a peace deal with the government difficult, especially under the premise of Assad maintaining power.

“It doesn’t seem a possible situation. The regime is built upon everyone blindly accepting everything Assad does. Before the revolution started, even I supported Assad. I looked to him as a great leader. He is a doctor and graduated in England. We all looked up to him for inspiration. When the revolution first started, they weren’t attacking against Assad or the regime, they were protesting against corrupt local politicians and for greater representational rights,” said Abdulrazzak.

The Assad family comes from the Alawite Shiite minority, consisting of farmers and hard-labourers living along the Mediterranean coast.

“Alawites would work the hard labour jobs most Syrians didn’t want to do. They were looked down on by most of the population. When Hafez came to power, he fired all high-ranking members of the military who were not Alawite, including my mother’s uncle, who used to be a colonel in the national army,” said Abdulrazzak.

“From 1958-61, Egypt’s then-President Gamal Abdel Nasser, attempted to form one unified Arab state. Syria signed on, but was forced to dissolve all political parties in their country before the unification could be attempted. This created a power vacuum. Top Syrian generals serving in Egypt were given top political positions in Syria. Hafez was given the role of defense minister. He came to power after a coup in 1970, called the Corrective Movement. There was never an actual democratic election to vote him into power,” said Abdulrazzak.

What elections have been established, have fallen far beneath internationally accepted standards.

“They aren’t real elections because nobody dares vote against Assad. The ballot’s would give his name with choices of a ‘yes’, or ‘no’ checkbox next to it. There’s no real opposition candidates to vote for. Citizens also vote for parliament, but parliament is just for show. They have no real authority. They vote through intimidation. Whatever Assad’s regime wants to happen, parliament will do,” said Abdulrazzak.

Assad has stirred ethnic tensions to manipulate relations between the Syrian people and form a dependable support base. “Assad convinced the Alawites if he is removed from power, they will go back to being farmers and hard labourers. They continue to support Assad as a means of better recognition and opportunity in society. He convinced them they will be killed by the rebels without him,” said Abdulrazzak.

“Syria has historically been a melting pot, with people from other nations using Syria as a crossroads to Mecca, and staying to live there,” said Abdulrazzak.

“A common saying before the revolution was, ‘All Syrian people are one.’ The opposition wants a unified Syria. This is where we stand against some of the actions of the (U.S.-backed) Kurds. Over the years, Kurds have melted into Syrian society, a lot living in the cities. They learned to speak Arabic, while also speaking their cultural Kurdish. We consider them Syrian Kurds, they are a part of our unified country. Them wanting their own autonomous Kurdistan (with pieces of land from Syria, Iraq, and Turkey), threatens Syria’s unity,” said Abdulrazzak.

However, he can understand their frustrations in wanting autonomy because, “Since the revolution, Assad’s regime does not treat the Kurds like real citizens. They are prohibited ID’s, yet they are forced to serve in the military,” he said.

“In Syria, service in the military is required for at least two years. In places of opposition against the regime where forced conscription was enforced, the Free Syrian Army was born of these trained fighters. Soldiers were kept away from their homes and families, so they deserted the army and began to fight back. The opposition depends on civilian fighters, while the regime mainly depends on militias.”

Extremism was born from this confrontation and the war’s turmoil.

“Originally, the extremists came saying they were fighting against Assad, not that they wanted to form their own state. The people welcomed them because they pledged allegiance to the cause of the Free Syrian Army. Once ISIS formed their own state, their cause was less for liberation from Assad, and more for warring against the Shiites they hate. I don’t think there is a general hatred of Shiite by most rebel Syrians, only a hatred of the Shiite who support Iran or Hezbollah.” said Abdulrazzak.

Destabilization and a vacuum of power allows the extremists to further their control.

“We saw what happened in Libya, where NATO came to the defense of the opposition against Gaddafi’s regime. We were hoping for the same aid in our revolution,” said Abdulrazzak.

However, this destabilization led to chaos and greater conflict in Libya. Abdulrazzak explained how currently there isn’t enough organization amongst the revolutionaries to form a unified government.

“Assad made sure there were no organizations or individuals who could gain power and oppose him. He would imprison, torture or kill anyone who was a threat to his regime. We have military leaders, but we lack any real political leaders,” said Abdulrazzak.

“We turned to NATO because we can’t look towards the UN Security Council for help, because of Russia’s permanent veto.”

“Without the aid of Russia, Assad would have lost the war. In 2012, most of the land was in opposition control. But then Iran sent in massive forces, followed by Hezbollah, and the revolutionaries couldn’t hold them off. International action needed to occur when Russia allied with Assad and began attacking the Free Syrian Army in 2015. The opposition has no heavy arms to combat Russian air attacks and the regime’s air force. Saudi Arabia only sends the opposition financial aid and minimal weapons, and the U.S. is afraid any heavy arms supplied to the opposition will someday make its way to Palestine and be used to potentially destabilize Israel,” said Abdulrazzak.

“Most of the weapons that are supplied to the Free Syrian Army come across Turkey’s open border. Turkey has hosted somewhere near 3 million refugees, so while President Erdogan does some things we don’t like, such as attacking the Kurds, he is still viewed as our greatest ally. But his help isn’t enough.”

“Because of the lack of international aid, Assad controls most of the country now. The only parts out of his power are along the northern, eastern and southern border. There are still some rebels hanging on in Homs. However, since Russia intervened, it’s not the same war. The bigger powers control the destiny of the Syrian people. After the rebels are pushed out, I don’t think Assad will be able to fight them along the southern border, because his troops will not be allowed to get that close to Israel. I could see the southern rebels forming their own government and having some autonomy, but ultimately being forced to submit to Assad. Assad wouldn’t enter, but they would still be under his control. If that doesn’t happen, I could see Syria falling apart and splitting into different countries. Nobody wants to see a divided Syria, but any choice without Assad, is seen as the only way.”

“I personally can’t imagine ever going back to somewhere under Assad’s rule. I still have dreams of being followed and hunted by Syrian Secret Services. One of my middle schools was located near one of Assad’s homes. There were constant armed soldiers and checkpoints, and a lot of the students in my class had family that were high-ranking military members,” said Abdulrazzak.

He concluded, “There is no such thing as a healthy Syria anymore. Just watching pictures or videos of the brutality and killings is enough to destroy you. Many people are witnessing these atrocities every day of their lives, and somehow, must find a way to survive.

“In America, especially at COD, many are unaware about the real Syria. They often believe misguided things about the war. Many of them don’t even know why the war began; all they focus on is ISIS. However, social media has brought greater awareness such as during the chemical weapons attack in Douma. It was on facebook and twitter and everyone was talking about it. It helps bring my people’s voices to the whole world, shedding light on the suffering happening in Syria,” said Anas Abdulrazzak.

To Help Those Affected and for Further Insight

The Syrian American Medical Society (SAMS) is a non-profit providing medical care, equipment and personnel to aid Syrians in need. They also provide humanitarian assistance to Syrian refugees in Syrian camps and neighbouring Jordan and Turkey.
Syrian Community Network (SCN) works with Syrian refugees helping them transition to life in American society. There is a chapter based in Chicago supporting refugees with appropriate services and community resources
Watch the Oscar-winning documentary The White Helmets, detailing the heroic lives of the volunteer rescue workers of the Syrian Civil Defense as they try to save desperate civilians caught up in the violence of the war

When we gloss over the human side of conflict, we lose sight of the total devastation the violence has taken. What we lose can never be regained. We must ensure their voices are always heard.