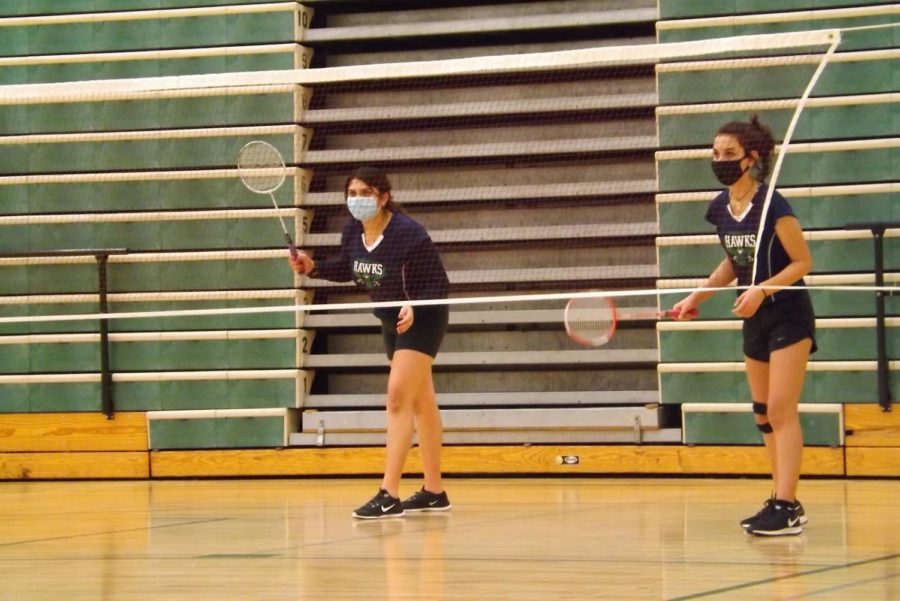 In March 2020, try-outs for the Bartlett High School (BHS) badminton team had already ended, and each member of the team was given her uniform. Junior and varsity badminton player, Isabel Cuellar, was excited for the season to begin. Then COVID-19 came. To prevent the spread of the virus, schools shut down and resorted to online learning.

“When everything started shutting down I thought it was scary,” said Cuellar. “It kind of sucked because school shut down the Friday before our first game because it was on that Monday. I was disappointed, and I definitely didn’t expect it to be this long.”

After a year of being in the pandemic, the badminton season has begun again. Since the sport is relatively a socially distant indoor game, the administration changed the starting date. Varsity Badminton Coach Cathy Miller explained the need to move the sport to winter.

“We had to be six feet apart, and there were no spectators allowed,” said Miller. “We weren’t allowed managers. So they’re all pretty much playing at the same time, and you’re trying to watch six courts at one time. I feel bad because I couldn’t give them the advice that I could if I had been able to watch.”

Elgin High School and some other schools set up cameras to allow people to watch from their homes, which are still available on Youtube.

Cuellar was anxious to start playing again, especially without having practiced for over a year. However, the abrupt ending to last year’s season made her appreciate being able to compete. Some things about the team have changed, such as having to wear masks.

“It was hard to play at first because we had to wear a mask the whole time,” said Cuellar. “But I started to get used to it. We all had our cute, little bag of birdies that only we could touch. We had to keep track of our own birds, and we put our initials on them.”

Before the pandemic, the gym was shared between badminton and boys’ volleyball. However, with the COVID-19 restrictions placed, the badminton team can use the entire gym.

Miller said, “These kids have not had any interactions in so long, and I think it was important for them to be able to play and compete. I enjoyed watching varsity and JV develop a really, really close relationship.”

Cuellar competed at sectionals at the end of March but unfortunately will not be competing at state. The team is hoping to have a badminton camp during the summer, but the logistics about the space and COVID-19 restrictions still need to be discussed. Alumna Amy Chen, current students and others are looking forward to playing together again, once it is safe to do so.

“When I found out that they were playing, the season was basically over,” said Chen. “I wish I would’ve known. I would’ve cheered them on virtually!”