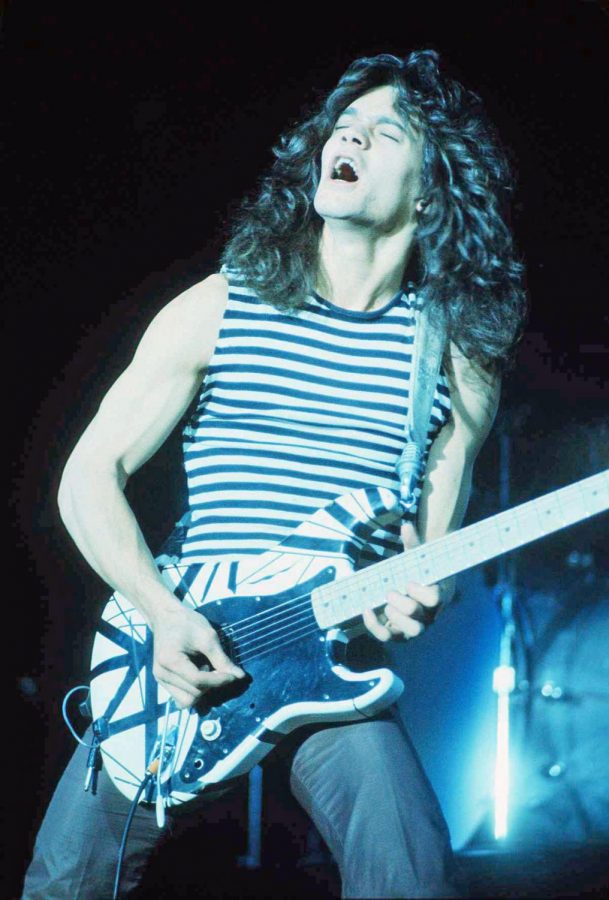 Eddie Van Halen passed away Oct. 6 following a long and troubling battle with throat cancer. He was one of the best guitar players who ever lived and was a key member of one of the biggest bands to emerge from the late 70’s and the glam rock era of the 80’s.
Despite Michael Anthony’s bass, whose sound brought both structure and style, Alex Van Halen’s rhythmic and energizing drumming, and the static, yet lively presentations brought by both frontmen David Lee Roth and Sammy Hagar, it was Eddie who really stole the show with his wizardry on the guitar.
With his fast-paced, nonstop guitar riffs and solos, Eddie Van Halen was both the sound and the image of Van Halen, the main fuel that created one of the biggest rock groups in music history. Eddie Van Halen was self-taught and understood the fundamentals and underlying importance of the guitar to rock music. He even invented the tapping method in which he would lightly tap each string on his guitar, emulating a fast-paced, indestructible sound that spiked live audiences with adrenaline.
The tapping method was a new way for people to play and understand the instrument while creating a bit of a challenge for hardcore guitar fans to try and emulate. This tapping method can be best heard on one of Van Halen’s most beloved songs “Eruption.” This track off Van Halen’s self-titled debut album is the definition of what Eddie Van Halen brings to the world of guitar. This one minute and forty second track is one of the band’s greatest hits, spotlighting Eddie with a moment of pure mastery and overarching musical talent.
I remember watching a live performance of Eddie playing that solo but for 13 minutes straight.
Seeing him with his cigarette in his mouth, guitar in one hand, fingers moving rapidly through the strings, it brought me into another world, drawing me into the raw, energy inducing, metal-sounding guitar work that was a signature Eddie Van Halen sound. The song is one of the bands finest and the track that should be the first one thought of whenever his name enters a conversation. That song made Eddie the guitar god we all know him as.
Just hearing that solo makes me wanna cry now. It’s sad that I never got to see him perform live, and that a man of true talent and extraordinary musical capability has now left us. His guitar work brought inspiration to many by creating a sound based on his level of musical understanding and creativity as an educated and resilient musician.
How many people did he inspire to pick up a guitar? In a lot of live performances when he wasn’t drinking or smoking a cigarette, Eddie was at the top of his craft, transforming the guitar from a tool of music to an audio message of hope and inspiration for the skills musicians can reach when they really dive into their craft. Eddie loved the guitar. In a lot of his concerts you can just watch him smiling, so happy to bathing the world with his sound. Bringing the greatness and unjustifiable sound of guitar was his goal.
That opening riff to “Running with the Devil” always gets to me. I think, “This sounds just so badass.” Maybe that’s not a sophisticated take, but who can argue it isn’t true?
That opening riff lays the foundation for the whole song, setting up the heavy and raw empowering sound that is Van Halen. I want to headbang every time I hear it. It’s like my brain is jacked straight into Eddie’s guitar.
Eddie Van Halen truly let his mark on the world of music. His fingers did all the talking as they gave us some of rock’s finest solos and riffs. It’s an overstated term, but he was a pure genius with a guitar in his hands.
Goodbye, Eddie. Thank you for sharing your amazing talent. Thank you for the music you gave us that will live on. Rest in peace, and rock on into the next life.