Something in the way they sing, attracts me like no other cover: Beatles cover-band American English kicks off the MAC’s Lakeside Pavilion Summer Concert Series 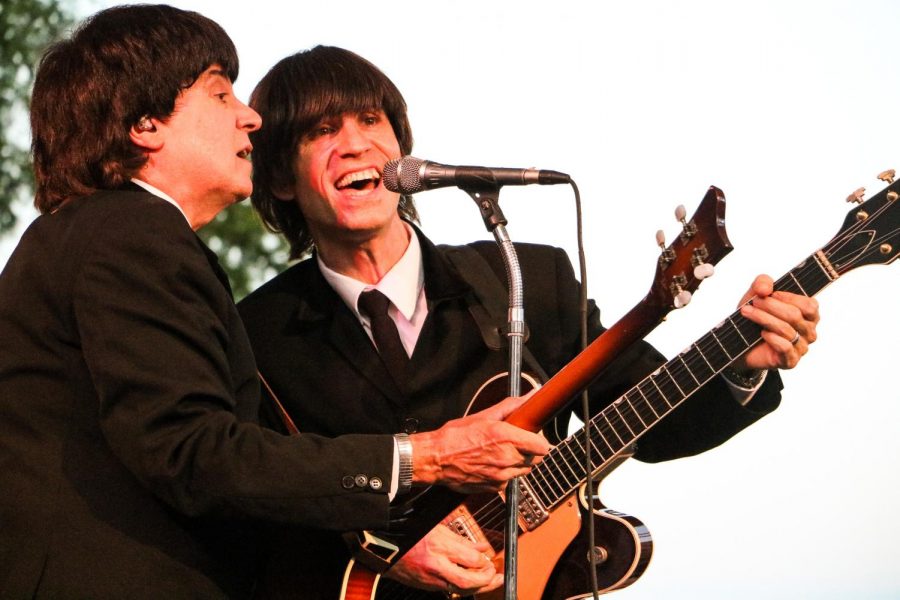 The word “love” is affectionately used 613 times across the revolutionary canon that makes up The Beatles’ career. This love transcended boundaries, shaking the world unlike any popular movement seen before. Permeating class, ethnicity, gender and any other label society tries to burden us with; this love emancipated a desperate youth into a mania of historic proportions.

Congregating a rainbow of young and old, and all different walks of life, the loving tides of Beatlemania surged on during College of DuPage’s McAninch Arts Center’s opening celebration of their 5th annual Lakeside Pavilion Free Outdoor Summer Series. The season-long excitement began July 13 with Beatles cover band, the prophetic purveyors of peace and love, American English.

As hops wafted from the beer tent, and notes of grilled beef and buttery popcorn peppered the concession stands, excitement was sprawled into every square foot of the pavilion. Around 2,500 came together over a night of tangerine trees and marmalade skies. Serenading the crowd before the mop tops invaded, student performers from The Addams Family: A New Musical Comedy delighted the audience with their jubilant and often morbid comedic numbers.

As the torch bearers of rock n’ roll divinity took to the raised stage in mod suits and Beatle boots, raucous singing and feverish dancing broke out. Beginning with the early music of The Beatles’ Ed Sullivan Show-era, even a spontaneous conga-line rippled through the crowd, dancing to the hypnotic groove of “Twist and Shout.”

When asked where this love for Beatles music comes from, and what about the music resonates across generations, Tom Gable (who performed as Ringo Starr) responded, “The music was so well-written, and it was so diverse. Every song had a unique sound and had a magical quality to it. Most of the early music was about love, and when we perform that with the different hair and costumes, it’s fun to watch for the whole family.”

Eric Michaels (who performed as Paul McCartney) talked about the necessity of The Beatles’ message, “The 60’s were a crazy time. President Kennedy was killed right before they hit America, and later in their careers Bobby (Kennedy) and MLK was shot. The Vietnam War was raging on. And so spreading the message of love was what it was all about.”

Gable added, “The music back when the Beatles first started was designed to be so safe. You had Frankie Avalon, Bobby Rydell, and others in prim sweaters. People were progressing but the music wasn’t. They spoke for the people.”

Jim Irizarry (who performed as John Lennon) elaborated, “After their break-up, John continued their message with the peace movement. If he was still with us, he’d be out their protesting and pushing the message of peace and love. He’d be using his power to influence the whole world.”

Performing one legendary song after another, American English, in thick Liverpudlian accents, captured the humour and dynamism of the Beatles unmatchable chemistry. The band blended their performing antics and unmistakable harmonies exemplified by the Fab Four.

James Paul Lynch (who performed as George Harrison) explained, “We are method actors, just like any other actor. You go and study miles of footage, videos and sound-clips.”

Irizarry remarked, “Everything is on YouTube, where we can find clips of anything we want. Like a Beatles concert in Germany 1964, you can see John’s antics and sense of humour. For help with Liverpool’s accent, we can watch the films, “A Hard Day’s Night” or “Help.”

Lynch followed, with laughter from the band, “We’ve been to Liverpool many times. We ask them if we are doing the accent right, and they respond, ‘No way!’”

Michaels said, “But we did actually manage to fool a lot of them with our accents.”

Gable pointed out, “Learning the music is easier now because of YouTube. In the old days, you had to listen to the record a thousand times, or go in the car, turn the bass all the way down, put the left channel off, turn the treble up, now it’s so much easier. These days, you can go on YouTube and hear the drums all by themselves. Anyone can be like Ringo.”

When asked if the Liverpool accent ever accidently comes out in normal life, Lynch

laughs about it coming out at a cousin’s wedding when he was asked to sing. “It just accidently turns on, and then your brain clicks. What am I doing, I’m not from Liverpool?” he said.

Irizarry added, “I find myself doing it subconsciously at times, and people will tell me I sound English.”

As the rockin’ numbers rolled along, a touching moment came when the band played Lennon’s beautifully scribed slow-tempo “In My Life” for an adorable older couple’s anniversary.

Remarking on what it takes to create a set-list out of so many cherished Beatle songs, Michaels explained, “If you throw in a couple of B-sides and lesser known songs along with the hits, you win over the whole crowd. We played “It Won’t Be Long” the other day, and the crowd went nuts. Tonight, the married couple e-mailed us with that special song.”

“It’s hard though, because to play them all, you have to remember so much. For me at least, I have so much packed in my memory, it seems like I have to remove something to add something new in,” he said to laughter.

Gable elaborated, “A lot of their songs are incredibly complicated. For example, “Happiness is a Warm Gun”, for being only three minutes, the song is incredibly complex. There are so many time signatures shifts in there. And the key also modulates back and forth.”

Michaels responded, “They use to say, ‘We write them easy, and we record them complicated.’”

Gable finished, “The Beatles’ music is wired into everyone’s DNA. They are humming it in their heads; they know exactly how the drums go, the harmonies and the guitar parts. We have to get it right. We can’t veer too much from the records because there are levels of expectations.”

After a costume change, the band returned adorned in a flamboyance of colours that could only come from the Sgt. Pepper-era. It became time for the audience to turn off their minds, relax, and float downstream. As groovy trippy patterns reflected off the amphitheater, psychedelia was upon us.

Asked, did you end up playing the character that represents your favourite Beatle, Gable responded in a heavy Liverpudlian brogue and typical Ringo fashion, “You know, I always wanted to be Paul.”

Michaels mused, “I have always loved Paul and John pretty equally. Some of the more personal songs by John, like “Julia”, I just die inside. They are just so touching and sensitive. He had a flare for tapping what was inside him, what was real. Paul had a great talent for the sing-along type of stuff, ‘Penny Lane there is a barber showing photographs,’ but some of that stuff is just so hard to remember.”

Gable continued, “John and Paul were such a great blend because of their styles. By helping each other, they took those two strong, sometimes opposing forces, and magic would happen. You would get a two-flavoured sound, and the results were just incredible.”

Michaels added, “They would compose in pieces, just like “A Day in the Life”. They would later try to assemble those pieces together. John wrote the majority of that song but was lacking something in the middle part. Paul comes along and says, ‘I’ve got something that I think could fit’. ‘Woke up, fell out of bed, dragged a comb across my head,’ it has a completely different sound and feeling from the rest of the song.”

Between Sgt. Pepper-era songs, a sound delay on the immensely talented Ken Zamonek’s (who performed as Beatles’ producer George Martin) keyboards, prompted Lynch, never skipping a beat as George, to joke, “Sorry for the hold-up. We tried to tie a trumpet to John’s face once, but it looked ridiculous.” The jovial crowd broke out in laughter.

Gable discussed the genius of producer George Martin, “The Beatles had the raw talent, but George Martin helped make the music more presentable. He was classically trained and had the talent to hear things the band couldn’t.”

Lynch followed, “The Beatles would come to Martin and present him something great from their imaginations, and George had the talents to apply their ideas down to making records. He translated their ideas so they would become their best.”

Michaels remarked, “Martin actually taught Paul a lot of music. John was more about going into the studio and capturing his song in one or two takes. He was into capturing the spontaneous part of recording.”

Gable finished, “Paul became the real musician of the band. He was great on every instrument, and became a guiding force for the band on the structure of the songs. He would make them record it 20 or more times until they got the best take. He was a perfectionist. But Lennon was the genius. He came up with things that were so out of this world and ahead of its time. There was nobody else like him.”

As the apocalyptic rhapsody of “A Day in the Life” thundered across the crowd, the band retreated for a final costume change, with Lynch staying on for a solo acoustic medley. Proving with a guitar and an open heart, there’s nothing you can do that can’t be done. Lynch’s “Here Comes the Sun” broke out into a sing-a-long, with the smiles returning to their faces. The band then returned drabbed out in Abbey Road-era costumes. Something in the way they sing, attracts me like no other cover. Something truly special and magical happened with the audience as American English celebrated The Beatles’ later songs.

Gable remarked on the band’s special relationship with the audience, “When I said on the mic, we love playing at College of DuPage, and we wait for this gig, I really meant it. The stage is perfect, the setting reminds me of old Roman ruins. It’s just fantastic. With the food vendors, the environment is always great and people really pack the place in.

Irizarry said, “When we play the bigger gigs, the people really dig the music and you can feel the electricity in the air.”

Gable responded, “We played Victoria Street in Liverpool to 55,000 people. What’s good about being a tribute band is we can play to all different types of crowds and each show will be different because of the setting. Playing a show like here at the college has a different dynamic. Each one is exciting to play, whether the bigger shows, or the more private and intimate shows.”

After the concert, Gable remarked on the responsibility of pop music to aid in the social progression of its listeners, “In the Beatles’ touring contract was a no discrimination clause. No segregated audiences or venues that wouldn’t let minorities in. They would refuse to play the venue. Back then, that was extremely revolutionary. People of all colours would come away from the concert saying, ‘It was like they were singing to me.’ The Beatles touched everyone and were a universal language. The music came first, and nobody listening cared if you were white or black. When it comes to music, the walls of prejudice come down.”

“Even today, music continues to share in that. You see all different walks of life and different people participating in the music,” he finished.

The next show in the MAC’s Summer Series will be a performance by the New Philharmonic Orchestra on Friday, July 20 at 7:30 p.m.

In such politically divisive times, with widespread acrimony and mistrust amongst the public, let the music bring us together. Learn from The Beatles, and enjoy the magic. Hear their refrain echoing on, “All you need is love, love is all you need.”