Exploring the transcendent nature of sports in American political culture 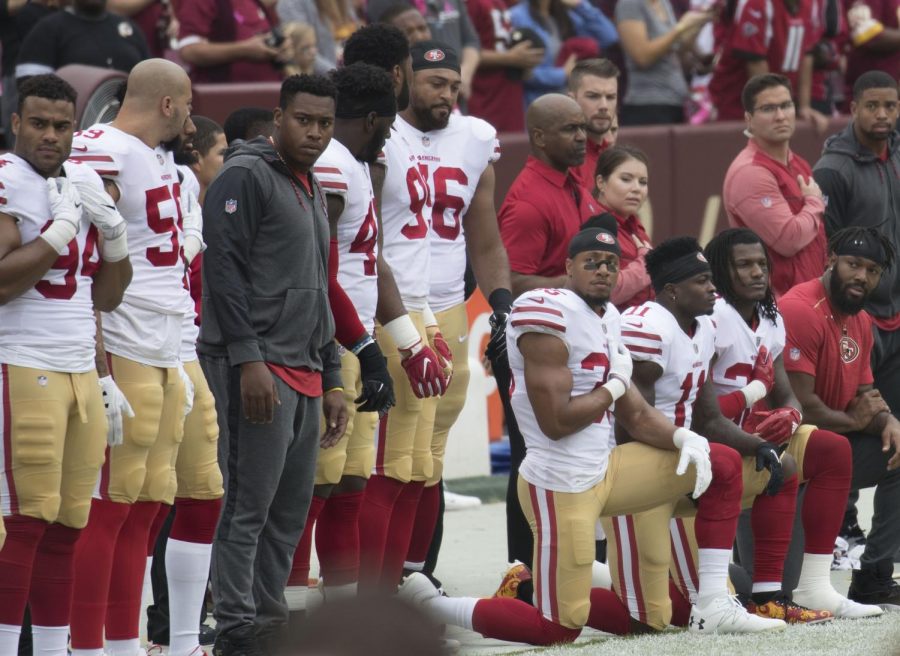 “Why don’t we just bomb the sh*t outta ‘em. Just drop a nuke on their whole country.”

The disdainful echo of my eye-roll at this casual mention of genocide falls on deaf ears. “Man this kid has a hell of an arm,” he says transitioning, as I gather my thoughts and nod my head in silent compliance.

We disparate voices of America, we poor and huddled masses congregated in worship beneath the altar of our ever-pervasive cultural lobotomy.

Transcending barriers, exacerbating tensions, sports have the power to permeate the fabric of our social-consciousness and impassion us into fanaticism.

Somehow bipartisan yet partisan at the same time, sports have the impetus to unite polar opposites while also further fueling the fires of division.

One often hears rhetoric condemning the use of athletes utilizing their platform to express a political message. To what gravity should we bestow the power of political leverage upon our beloved sports heroes?

Should NBA superstar LeBron James’ political voice be diminished because his education doesn’t exceed a high-school level? Or is he representative of a global brand with the admiration of millions, whose power mimics and supersedes that of many influential corporations?

Should NFL quarterback Colin Kaepernick be viewed as a pioneering modern civil-rights leader fighting against racial oppression and police brutality? Or does the hypocrisy of his refusal to vote in the 2016 election highlight the arrogance and ignorance of his character? I’m sure Georgia Congressman John Lewis and the other protesters who brought racial America across the Edmund Pettus Bridge might have something to say about Kaepernick’s self-disenfranchisement, however, the spotlight falls upon the player because he knows how to avoid the blitz.

Ambiguity reigns supreme. A kneeling athlete expresses his sympathy towards the Black Lives Matter Movement, and liberals fall in line. Unless it’s done by a Florida demigod, and then it’s done to bring fans closer to a bearded man in sandals, and Christians fall in line.

Gathering acolytes, spreading disciples, fighting against the status-quo, reinforcing the status-quo; athletes are personified ideologies competing to permeate our social understandings of the world we live in.

However, to the power-hungry Machiavellian optimist, sports represent a malleable apparatus by which to craft a false-narrative delegitimizing their opponents while simultaneously feeding their political agendas to an all-too-susceptible public.

The public loses their power to define the athletes’ messages when outside partisan groups utilize their influential platforms to steal the athletes’ intentions and contort them into a deceptive rhetorical device.

Kneeling during the national anthem becomes either a glorified protest against systemic racism and police brutality, or a disrespectful, treasonous action, all based upon who is controlling the narrative.

Perspective is just an illusion. The messages have been crafted down to their metaphysical level to ensure ignorant compliance and willful subjugation of individuality.

Fox News, MSNBC, Breitbart, CNN and Mother Jones all use sports as an instrument to open up the social-consciousness of lobotomized America. They want followers, not independent rational-thinking individuals.

They want you to believe an athlete has the same right to influence their impressionable fan-base politically as a narcissistic real-estate mogul has in running the most powerful nation on the planet.

So do we completely reject the masquerading swindle, the propaganda machine, and delegitimize the mouthpiece of athlete activists? Or do we recognize their protesting and political ideologies represent the extent of greater social movements surging across all facets of society? Do they therefore represent the un-represented? Do they give a voice to the voiceless and a podium to the uncelebrated upheaving tensions of society? Are athletes representative of the fluctuations of American culture itself, or have they become the self-serving testimonials of narcissistic individuals?

I realize the hypocrisy in cheering next to an individual who politically disgusts me. I also realize the hypocrisy in cheering for an athlete or the team of an owner who politically disgusts me. However, we have been socially-conditioned to follow the herd. There is a pack-like mentality, an overpowering urge to unite with our differing brothers and sisters, preaching an “us against them” mentality; our team against yours.

But take notice. The “us” and “them” have become so loosely defined and intermingled with other groups of “us” and other groups of “them,” our culture has become tangled in a tapestry of interconnectivity, redefining and transcending stereotypical barriers of division and opposition.

The question pervasive through sports and our culture remains, does this transcendence lead to a progression of social improvement, or rather further lead to an increasingly lobotomized nation?