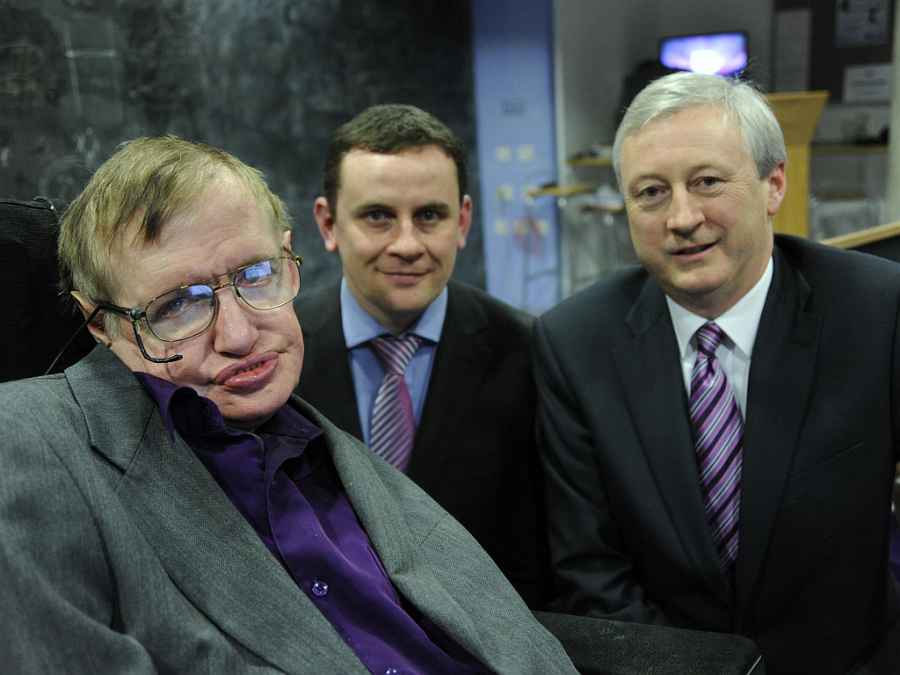 Stephen Hawking’s life proved even the darkest places in the universe radiate forth with light.

Hawking’s radiation emanated from the magnetism of his charisma and the gravity of his position as the planet’s most recognizable and adored scientific celebrity.

He possessed an innate capability to conceptualize the incredibly abstract. He could then translate the esoteric nature of cosmology and theoretical physics down to bite-size understandings everyday people could grasp.

Hawking inspired decades of audacious scientists and aspirational dreamers to look upwards towards the night sky and wonder vividly in infinite curiosity.

Setting him apart from perhaps more accomplished physicists, Hawking’s perpetual determination captured the public’s attention. Unlike others in his field, Hawking had the talents to punctuate the mundanity of the academic world, and shake the public’s impressionable imaginations.

Hawking used his celebrity status to reach the masses and infuse our lives with wonder and bewilderment. I remember the awe-inspiring moment he taught me through one of his many televised science specials, that as an apple falls down due to Earth’s gravity, on a infinitesimally small scale, the Earth and everything on it gravitates upwards towards the falling apple. Gravity constantly has a tug-and-pull effect on my body with every step I take. Simultaneously I am being stretched and pulled in every direction. The Earth’s massiveness is the only thing keeping me grounded.

Mirroring his physical struggles, Hawking once quipped, “One of the basic rules of the universe is that nothing is perfect. Perfections simply doesn’t exist…Without imperfection, neither you nor I would exist.”

Hawking and a group of scientists in 1982 calculated this irregularity in the early universe. He then set out to demonstrate how imperfections are fundamentally built into the laws of our universe by setting up an observational experiment accessible to average minds.

Hawking explained, right after the Big Bang, the universe was just gas, almost perfectly spread out throughout space. To show this, he spaced tiny metal balls in precisely lined rows down and across a flat wooden floor. “If they are all the same distance apart, gravity pulls each ball the same amount in all directions. They stay perfectly aligned, and nothing at all happens,” Hawking said. However, a few metal balls were removed to symbolize the incredibly tiny unevenness in the early universe. Gravity now pulls more strongly on one side of the metal balls, causing them to gravitate towards clumping with others.

“This is exactly what happened in the young universe. Parts of the sea of early gas were ever so slightly thinner than others. The denser parts began to clump together. It was in these denser areas that all the stars and galaxies would form,” Hawing explained.

“If it weren’t for this stroke of cosmic luck, there would be no you, no me, no stars or planets or anything at all,” he said.

Inspired by his aptitude to bring the complexities of science to the masses, scientific cultural icons such as Carl Sagan and Neil deGrasse Tyson continued to enlighten the minds of curious imaginations everywhere.

However, the warmth of his characteristic radiance was tested and formed through years of unimaginable adversity.

Darkness crept into his life when he was diagnosed in 1963, at the young age of 21, with amyotrophic lateral sclerosis (ALS). Doctors gave Hawking two years left to live. However, 55 triumphant years later, we say goodbye to the pioneering spirit whose tenacity redefined the capabilities of human achievement and imagination.

While his muscles succumbed to a progressive degenerative atrophy, his mind rebelled against his hellish circumstance, remaining pristine throughout the years. Self-confinement became defined not by his physical limitations, but by the barriers to which his imagination constantly powered through.

Hawking was able to see the world in a grain of sand and internalize in his imagination the entirety of the infinite universe.

His astriferous career first beared light when his doctoral work deduced from his mathematical calculations that the immense universe emanates from a tiny singularity. Tracing Albert Einstein’s Theory of General Relativity back before the Big Bang, Hawking proposed all energy and matter in the entirety of the universe was first concentrated in a single-point. This single-point was of zero-size and infinite density, and its rapid inflation is what gave birth to all of creation. The stars, the planets, galaxies and life itself all emanate from this singularity.

Hawking breathed life into the world of physics, which had become complacent and all-too comfortable with the laws of general relativity. Hawking endeavoured to dive deeper into the nature of reality, pushing the frontier of science to new discoveries.

Hawking demonstrated that accurately observing this singularity and even understanding its conception, becomes impossible when the laws dictating general relativity become fuzzy and start to break down. This happens when trying to apply the gravitational laws that dictate larger objects to the subatomic world. Hawking and other scientists realized the laws of general relativity and the laws comprising quantum mechanics (the tiny subatomic world) behave together like feuding cats and dogs.

This discovery inspired a new wave of energy in the world of physics that still resonates with the discoveries being made today.

Fuelling the fire of curiosity, Hawking embarked on a pioneering journey to study the places in the universe where general relativity and space-time became wibbly-wobbly. He dedicated the majority of his career to studying black holes; where the mechanics of mathematics seemingly broke down. Hawking believed understanding their perplexities would shed light upon the birth of the universe.

Hawking studied the paradoxical nature of entropy and its relationship with black holes. One of the fundamental principles of physics is all matter in the universe linearly shifts from order to disorder.

Symbolically mirroring his mind’s incredible persistence during his progressive physical deterioration, somehow black holes defied the logic of entropy. Falling matter into a black hole seemed to decrease disorder. Being trapped into the crushing dark abyss actually fosters the necessitation for light.

Hawking and his team deduced black holes actually have a temperature. Science dictates anything with a temperature radiates with energy. Therefore, the seemingly darkest places in the universe actually radiate forth with light.

There is a halo of illumination surrounding the most infinitely hopeless places in existence. Through the bleak void of space, black holes actually shine. No matter the circumstance, light always supersedes the darkness.

In a spark of genius, Hawking tangled the mathematics of general relativity and quantum mechanics together to propose the principle all black holes radiate energy. The movement of this energy and light is now known as Hawking Radiation.

His theory leads to the proposition that as light is radiated and energy is lost, a black hole atrophically devours itself into evaporation.

Due to his scientific breakthrough with Hawking Radiation, Hawking was named the Lucasian Professor of Mathematics at Cambridge University, the same post held by Isaac Newton.

From this mantle-piece, Hawking transformed his unconquerable imagination into a luminary for the world of science. His celebrity-status was heightened and solidified with the 1988 release of his layman’s guide to the intricacies of cosmology, A Brief History of Time. The best-seller was purchased over 10 million times and made the wonders and fascinations of cosmology ascertainable to the average individual. He sparked a gravitational wave of curiosity across decades and generations. The light of his amiable knowledge ignited the torches of imagination across the planet.

Hawking became the most recognizable celebrity in the scientific world. Following in the footsteps of Einstein, Hawking’s status enabled him to break down barriers and stigmas isolating the world of science from the general public. Hawking’s teachings showed how science was a fascinating part of our every-day lives. Science became cool, it became marketable.

The scope of his achievements became secondary to the immense interest in science he inspired.

Hawking’s life even became the subject of the Academy Award-nominated The Theory of Everything (2014). His quest for finding a unified theory linking general relativity and quantum mechanics became a romanticized metaphor for mankind’s endless audacity against impossible odds.

When you put a face and a story as inspirational as Hawking’s behind a scientific movement, it quickly gains momentum in society’s imagination. His endeavouring became the forefront of human aspirations. His struggle became symbolic for our very struggle to enhance the progression of our species.

We were not born to stay confined to our debilitations. Our fate lies beyond our self-prescribed limitations. Infinite wonders and achievements lie at the precipice of our imagination. We look up towards the night sky and see eternity within our grasp. At the helm of the universe we tentatively take our first steps.

As we voyage out into the vast unknown, Stephen Hawking’s eternal radiance, and the pioneering luminaries who follow in his footsteps will provide the light that guides us through the darkness.