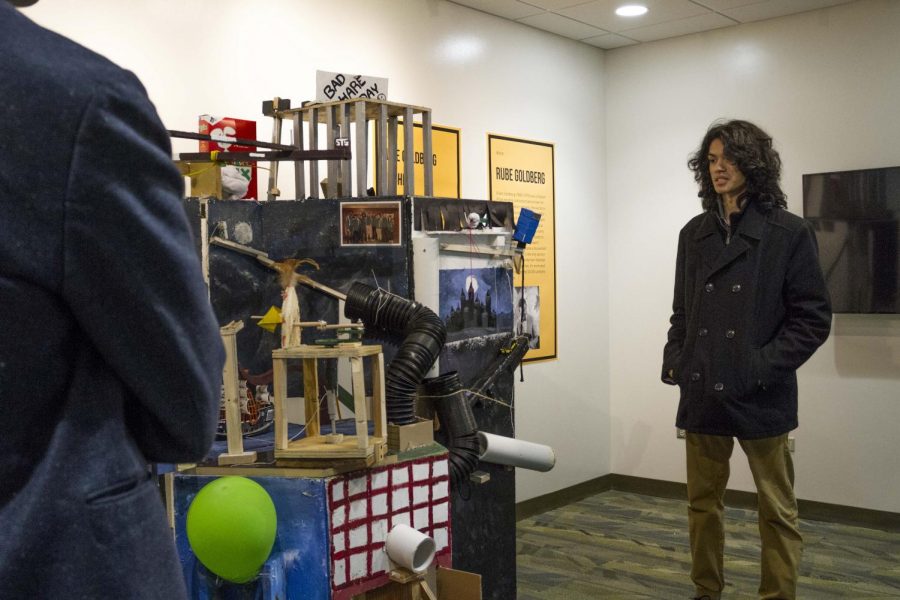 Imagine a cardboard structure with a kitten stuffed animal on top, a few plastic pipes and a lime green balloon. Now imagine that same contraption being used to pour a bowl of cereal.

Rube Goldberg, though being an inventor, was also known for being a cartoonist. With that in mind, it’s no surprise that his famous “Rube Goldberg Machines” look like something straight out of a cartoon. The machines are creative, impractical and often made out of a pile of junk.

Rube Goldberg machines have become so popular since their debut in 1928 that competitions are frequently hosted in their honor. At Purdue University in Indiana, the National Rube Goldberg Machine Competition has been hosted annually since 1988.

To celebrate the 30th anniversary of the competitions, the competition presented the “Pour a Bowl of Cereal” challenge. The machine is supposed to complete the task of pouring a bowl of cereal in a unique fashion. Previous contest themes included: Apply a Band-aid, Open an Umbrella and Erase a Chalkboard.

The College of DuPage (COD) Engineering and Technology Club accepted the task, built their very own Rube Goldberg machine and entered it in the national competition. That very machine has been brought back to campus and can now be seen in the Techcetera Gallery.

“The machine was completed in 3 weeks with some 2 months of planning,” said Remzo Vega, team leader for the competition. “Originally and ideally, the construction had started 3 months in advance. However, the complexity and scale of the machine had to be cut down to meet the deadline. This resulted in a restart of the build.”

The Engineering and Technology Club presented their machine to the Engineering Student Council Line Division III on Feb 17, 2018. They were the only community college to enter a machine into the contest.

“Everyone on board works together extremely hard as showtime quickly approaches and the feeling of competing against institutions much larger than ours resonates throughout the team,” said Vega.

Their Rube Goldberg machine will be held in the Techcetera Gallery now until March 23 in Student Service Center (SSC) 2211. The gallery is open Monday through Friday from 11 a.m. to 3 p.m.