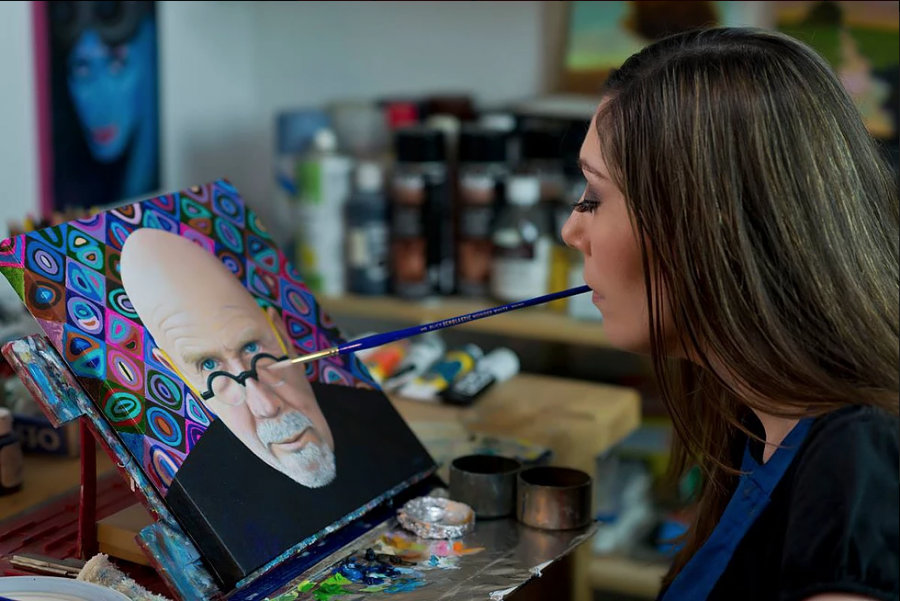 Mariam Pare, a former College of DuPage student, has been living with a spinal cord injury ever since she became a victim of gun violence 22 years ago. She described the struggle of living at the poverty level, in Section 8 housing, surviving on financial aid and relying on Medicaid. During her time as a student at COD she had to prioritize completing her education while balancing trying to meet her basic needs.

“My goal was to make something out of my life…I want to change my situation.”

Pare could not imagine what it would be like to manage all those responsibilities, without the vital support of the government programs that may be in line for deep budget cuts.

In December of 2017, Congress passed sweeping tax cuts on a mostly party line vote and heavy support from Republicans. At that time the Congressional Budget Office, a bipartisan group, estimated the new tax cuts would raise deficits by $1.5 trillion. After the GOP tax cuts passed, Paul Ryan (R-Wis) immediately refocused on the need for entitlement reform, citing the deficit. A part of this effort is a plan to further cut Medicaid. Despite the anticipated deficits resulting from the tax plan, The Hill reports that Ryan believes “health-care entitlements such as Medicare and Medicaid are the big drivers of debt.”

It is not only Medicaid that sees potential cuts. In June of 2017, CBS News spoke to Mick Mulvaney, the Trump administration Budget Director, who “promised to slice $72 billion from Social Security Disability Insurance (SSDI) and Supplemental Security Insurance (SSI) over the next 10 years.” He cited fraud as justification for the cuts. He stressed his priority was “to make sure that everybody on SSDI is really disabled,” and that his goal was to “test new approaches to increase labor force participation.”

The Trump administration’s focus on pushing Americans with disabilities back into the workforce was reemphasized earlier this year when a guidance was issued to all state Medicaid directors, announcing changes to the work requirement policy. Individual states can now choose to implement their own work requirement standards, time limits and lockout periods. These can be used, as the Trump administration put it in their directive, to incentivize families to “rise out of poverty and attain independence.” The added burden of work requirements could affect those with disabilities who were unable to meet the conditions required to receive SSDI benefits. Only those with SSDI benefits would be exempt. According to the Center for American Progress, a left-leaning not-for-profit policy advocacy organization, those impacted may include cancer survivors, substance abuse survivors, people with mental health disorders and some with chronic conditions.

Pare does not receive SSDI benefits, despite her disability. Pare is unable to walk and has limited function in her hands. After extensive rehabilitation, coupled with a lot of determination, Pare has been able to make a living as a mouth painter. This journey was a long one, however, and Pare was grateful to have the support of Medicaid, and the protections of the Americans with Disabilities Act (ADA). In March of 2017, Pare wrote an open letter to Trump, asking him to remember his promise to represent all Americans. She called for Trump to protect Medicaid, the ADA and other programs that allow Americans with disabilities to “be [a] social, economic and cultural part of [their] communities.”  She informed President Trump:

“…this changing of the presidential guard is an uncertain time for many Americans with disabilities. For those of us who have valued and relied on the policies of the last eight years under the last administration, we are especially nervous about what’s going to happen to the critically important policies that affect our lives… I pray that when you take office, you will keep a high regard for our civil rights, our safety nets, and our inclusion.”

During Trump’s recent State of the Union address, he repeated his promise to protect the American dream, for all who strive to obtain it.

Pare disagreed, asking, “where’s the American dream…when you are holding people down.” She felt the threats to programs that allowed her to follow her dreams were contrary to the promise Trump had made. “Hard work isn’t good enough anymore,” Pare said. Without the assistance that personal aids and subsidized healthcare provided, she would be unable to work and maintain her independence. Without Medicaid or the protections of the ACA, “I will never be able to afford my own healthcare,” she said. “I may never be able to transition off of welfare.”

Here at College of DuPage, Mike Duggan, the head counselor for students with disabilities, has watched the changes with a wary eye. No matter what, Duggan said, the College of DuPage will continue to uphold the same standards and would continue to strive for the best possible outcome for all of its students, equally. “In the past, the way we’ve addressed needs for students with disabilities has worked well, and I hope it will continue.” Duggan said there are a lot of unknowns associated with how the Trump administration’s policy changes may affect choices made by other schools, or the rights of students elsewhere across the country.

“We don’t know, it’s too early. We’ll probably know more in a few years. We can just hope,” Duggan said. “No matter the laws we’ll do everything we can to help people with disabilities as we would anyone else.”

When questioned on how other policy changes may impact the lives of students with disabilities, both on and off campus, Duggan was concerned about the possibility that cuts to funding would threaten access to the personal care assistants many students need in order to participate at COD.

They “literally need that to live,” he stated. Students with personal care assistants rely on them so they can eat, go to the bathroom and sleep. Without their support, some students would be unable to remain at school. Duggan stressed this access should be protected.

“People should have a chance to blossom and go on and contribute back to society,” he said.

Work requirements for those on Medicaid may also impede access to education for students with disabilities. At the College of DuPage, as at many schools across America, there are students with a broad range of disabilities. If Medicaid recipients with disabilities were required to work approximately 20 hours in to maintain their benefits, as they now do in Kentucky, Duggan said it could be a burden some students could not bear. Some students only take a couple of classes per semester, and that alone can be taxing.

“If you were required to go to school and work and had a significantly disabling condition, it could set you up for failure,” Duggan said.

Of all the changes the Trump administration has made, or has threatened to make, Duggan is most concerned about changes to the American Disabilities Act. The most important provision for COD students, Duggan said, is the equal access to transportation the ADA ensures. Accessible public transportation, including van transportation services, are a lifeline to both students and the disability community. It is “critical that that continues,” Duggan said. “Even just a deduction in access could have a drastic effect.”

Changes to the Americans with Disabilities Act are already underway. The Trump administration’s proposed ADA Education and Reform Act of 2017 already has 108 cosponsors in the house. If passed it would make it harder for individuals with disabilities to respond to businesses that fail to comply with ADA guidelines on access and accommodation. This is part of the Trump administration’s goal to “cut the red tape” and end over-regulation of businesses.

Pare and Duggan both felt the protections of the ADA should not be infringed upon. In her open letter to Trump, Mariam states:

“We have only had the ADA for 26 years and are still a long way from equality. Mr. Trump, I hope you will be our ally and oppose bills or legislation that may obstruct the hard-won protections afforded to people with disabilities under the ADA.

“President Trump, in your victory speech, you pledged to every citizen of our land that you will be a president for all Americans,” Pare continued. “Will you be the voice for Disabled Americans?”