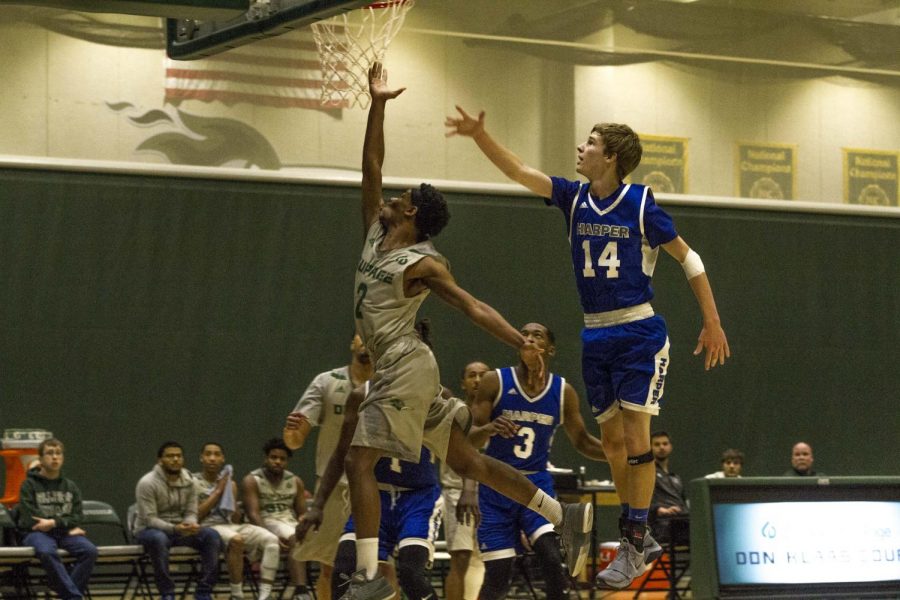 Defiantly trying to turn around their lackadaisical season (4-15) and end their final games with a momentum to build into the next year, the Chaparrals at home faced the seemingly hapless cross-county-line rival Harper (3-20) Hawks in a fast paced yet defensive-dominated competition. The Chaparrals utilized a high tempo start to overwhelm their opponents’ dreary lack of energy. Surging to an early lead behind a string of 3-pointers, the Chaps set out an early pattern of staying outside, trying to avoid risking penetration into the Hawks impermeable man-on-man defense.

Displays of high percentage field goals from the start, and when off the mark, strong rebounding by the determined pair of DJ Spell and Jason Peace, with 3 offensive rebounds each, reinforced the Chaps’ early domination. Tearing asunder the Hawk’s defensive persistence with cutting passes, Spell provided an early highlight assertively throwing down a dunk, contributing to his 10-point game.

Marcus Pugh Embrey prolonged the Chap’s early frenetic start, diving for a loose ball, laying his body out on the line for his team. A high agility surge by Tyler Scott (13 pts) resulted in a quick drain from the post, followed shortly by a 3-point buzzer-beater by Jason Peace, enhancing the Chap’s lead.

However, the resilient Hawks hung around lead by Joe Gatziolis’ 24-point game and Corin Daniel’s 19 point performance. The lead at half was diminished to only a four-point, 32-28 advantage.

Early turnovers in the second half presented a harbinger of the Chap’s undoing. The intensity of the Hawk’s defense began to strain the Chap’s scoring. Constantly unable to solve the Hawk’s stingy fortitude, Harper grabbed one of their first leads with only 5 minutes remaining.

The pivotal pinnacle of excitement came with 1:50 remaining and the Chaps down by 2, when the ball freely sprawled across mid-court. Using Isaac Newton’s gravitational calculations the ball should have bounced and parabolically fallen at 9.8 m/s squared as it traversed the court, however players launched and dove as the ball continued to implausibly float and evade their grasp. In a tapestry of tangled torsos and outstretched arms, the ball eventually fell to the possession of Harper who went on to cap the dazzling excitement with a quick bucket.

The play grew to be symbolic of the team’s entire season. Stridently effusing passion and enthusiasm, yet ultimately remaining tantalizingly out of reach. The Chaps went on to fall to the Hawks 66-58, crumbling late down the stretch, continuing their string of recent unfortunate outcomes. Statistically matching Harper in most aspects, the Hawks’ edge came in their superior steal count and forced turnovers.

The continuing saga of costly turnovers dictating their outcome has proven to be the team’s collective Achilles’ heel. Combined with a lack of scoring impetus late in the second-half, the Chaps struggle to find the answers needed for the win.

The Chaps now (4-16) will again be at home to face the tremendous Rock Valley (21-5) Golden Eagles visiting from Rockford on Wed. Feb 7th at 7:00pm (visit CoD’s men’s basketball NJCAA.org for further details). In one of the few remaining trials to end the season with a flourish, the Chaparrals look to shock their fans and upset Rock Valley in what is sure to be one of the most physical games of the year.