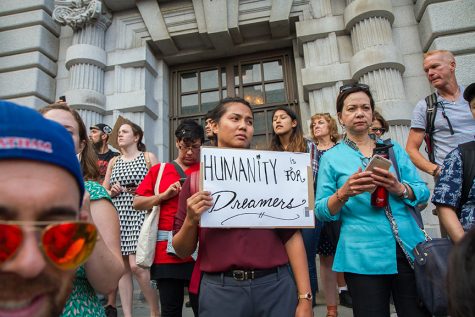 Drago Renteria
© EPA
President Donald Trump’s recent announcement to rescind Obama’s 2012 DACA (Deferred Action for Childhood Arrivals) earlier this month has left most of the community utterly confused. Similarly to our country, the College of DuPage sustains a diverse population, and unfortunately may feel the impact of Trump’s decision.

The Obama administration enforced DACA in 2012, aiming for it to give immigrants of the U.S. the ability to remain in the country undocumented. While DACA provides a near safe-haven for Dreamers, it is important to note that it does not grant lawful citizenship. Currently, DACA is reported to be protecting some 800,000 (while plenty more are considered “eligible”) undocumented youths, all who qualify by remaining in school, receiving a GED or an honorable discharge from service.

President Trump refers to DACA as “illegal amnesty” and an “overreach of executive power” according to Fox News. Fourth District Representative Steve King (R-IA) advised DACA members to turn their parents in to immigration officers. Attorney General Jeff Sessions called DACA a “disrespect to the legislative process” and later stated “Such an open-ended circumvention of immigration laws was an unconstitutional exercise of authority by the executive branch.” Trump has given Congress until March 2018 to decide the Dreamers’ fate.

Asked how committed COD is to undocumented students, President Ann E. Rondeau responded, “I want to assure you that the College of DuPage is committed to serving all of our students in a manner consistent with what the law permits”.

CODFA President Richard Jarman, and Vice President Jackie McGrath also commented saying “CODFA leadership maintains that changes to the DACA program are both cruel and unnecessary.” Jarman says the “real issue” is how the students will be affected by Trump’s decision.

He cites a Morton College statement regarding the same issue, “DACA beneficiaries on our campuses have been exemplary student scholars and student leaders, working across campus and in the community,”

“They have gone to medical school, law school, and graduate schools in numerous disciplines. They are actively contributing to their local communities and economies.”

Aaron Thompson, author of Diversity and the College Experience has identified eight benefits of diversity at a college campus: Expansion of worldliness, enhancement of social development, preparation for future success, preparation for global society, increasement of knowledge base, promotion of creative thinking, enhancement of self awareness, and the enrichment of multiple perspectives.

According to USA Today College, Illinois is one of five states with the largest DACA recipient populations, behind California, Texas, and Florida. University of California’s Tom K. Wong surveyed 3,036 DACA members throughout 46 states and found that Dreamers benefit this country far more than they supposedly hurt it.

Wong concluded that “at least 72 percent of the top 25 Fortune 500 companies employ DACA recipients,” and that “97 percent of respondents are currently employed or enrolled in school.”

Wong also found that DACA members were nearly three times more likely to start their own business at 25 years or older than the general American population.

Average hourly wage disclosed by participants rose 69 percent after being accepted into the DACA program, average salary was calculated at $36,232, and “65 percent, reported purchasing their first car. The average cost paid was $16,469.”

With a campus so diverse, including clubs such as the Black Student Alliance, Indian Student Alliance, and the Latino Ethnic Awareness Association, it is evident already that COD would not be the same without DACA.

Aaron Thompson refers to college campuses as “opening the door to the entire world without traveling anywhere else.” And the same door is looming to be closed as the Trump administration follows through with its promise on a tighter immigration policy for the country.