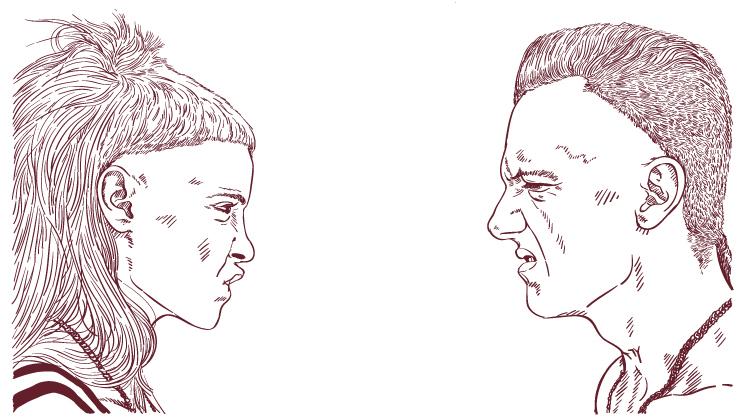 Before I found Die Antwoord, I wasn’t living life to its fullest extent. The constant berating of radio hits by “artists” like Chainsmokers and DJ Khaled gentrifies the entire idea of musical expression into an algorithm for record labels to exploit the public into only understanding maybe four to five genresn of music. This process has taken over to the extent of people scowling at the notion of something not fitting their favorite genre as music.

The quirky, almost satirical style of Die Antwoord is my choice of music for shaking off the bolted down rust of disgusting Auto-Tune and generic beats forcefully screwed into our ears by every form of media. Yolandi and Ninja’s roots in South African music, in conjunction with their fusion of well-developed electro and multi-lingual rap, pushed my definition of what music is to an entirely new reality.

In their newest piece of mindless self-indulgent musical expression, “Mount Ninji and da Nice Time Kid,” the duo take their style to an entirely redefined level. From cover to cover, the entire album is an eloquent loogie to the face of societal conformity. Every track has a completely different texture and tone, which throws you into a bipolar mixture of rapid and mellow energy.

The best example of their refluxed energy mixture comes at the introduction of their album, “We Have Candy.” The constant shift of fast drum and bass to their more orchestral vocals, juxtaposed to the obviously playful lyrics, sets the tone of the entire album right off the bat as energetic and light hearted.

As do most modern artists, Die Antwoord’s most popular tracks have varied sexual themes. However, the duo takes the idea of a sexual track far and beyond anything you would see from artists like Kesha and Nicki Minaj. In their previous mixtape leading up to this album, the song “Gucci Coochie” was all about how Yolandi’s love comes at the price of practically becoming her man slave.

Following in the footsteps of that song on this album is “Daddy,” an upbeat dance track about Yolandi wanting her sugar daddy to buy her everything she desires, from chocolate bunnies to cars. The production quality of the fast paced, catchy beat outright clears all questioning of the lyrical content, and that is what makes Die Antwoord’s music so powerful. Their music is able to absorb the listener’s attention long enough for their anxieties and frustrations to slip away out of their minds into the ether of the musical bombardment they’re experiencing.

I could go on forever about the other 13 tracks on this album, but honestly I don’t want to ruin any more of the experience. This work takes you on a wild adventure through different themes of nostalgia and discomfort within the story arch hinted at in each song. This is by far the rap duo’s best work. All of their previous works are still amazing by their own marks, but none of them compare to this mind-numbing, over-stimulating masterpiece.

Die Antwoord will be performing at the Aragon Ballroom in Chicago on Oct. 11.