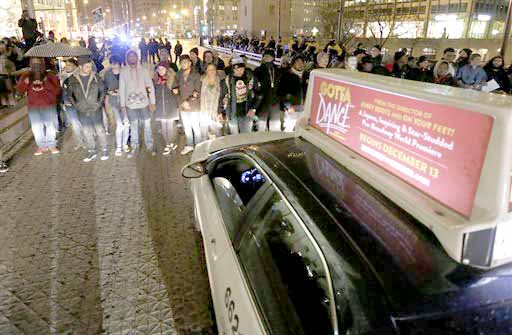 If I’ve learned anything from my years as a reporter, it’s that there are three sides to every story. Sometimes there are four, five…twenty. It all depends on who you ask.

As News Editor, I have seen my fair share of he-said-she-said, and I know it can be difficult to find a middle ground, clear of bias and exaggeration.

The Chicago protests, in response of Laquan McDonald’s alleged fatal shooting by a Chicago police officer, stand as a perfect example of what I’m talking about.

The protests started on the night of Nov. 24 and picked up again during Black Friday shopping on Nov. 27. Video footage lingered on our local news stations. We saw crowds running, stores being blocked and lots of people huddling together for a purpose.

What I’ve come to realize is that no viewer knows the truth of what happened this past week. From those who joined the protests to those reporting it live, there has yet to be a consensus of what actually happened.

While news stations framed the defacement of Millennium Park’s Christmas tree an act of violence accelerating in the direction of rioting, protesters will tell you a select few, not involved with the main group of protesters, acted out only to be silenced by other protesters.

While protesters will tell you that police had their hands on activists, acting aggressive, cursing and flipping off protesters, there is no media evidence to support these claims. That’s not to say one side is incorrect; it’s just to show that no middle ground can be agreed on.

As a news junkie, it frustrates me to no end hearing so many conflicting angles from those standing on the same grounds. I couldn’t help but jump to assume it was a case of bad news coverage, but I’ve realized what we have here is a clear case of split perspectives.

The media has a duty to inform the public of outrageous things happening around them. Imagine showing up to your beat, only to find a mob of people sprinting a block, then walking a block, continuously for hours. It’s no wonder footage was reused over and over as “breaking news.” It’s not out of reach to consider many of the headlines exaggerations created mainly to keep viewers checking in, now knowing that the anticipated violence never came.

It’s also not far fetched to call activist’s personal testimonies into question based on adrenaline in the moment. Being involved in any protest harvests strong opinions and draws strong-willed people, not to mention the emotional momentum generated when surrounded by a crowd of hundreds of people fighting for the same cause.

We may never know the small details of who really said and did what this past week. What we do know is that nothing ever advanced to an uncontrollable level. While I don’t think blocking a highway or upscale retail store is necessary, for the most part, the way Chicago represented itself in the midst of true police brutality was more than impressive.

Even after learning that our city has paid off hundreds of millions of dollars in police case settlements, citizens chose to remain peaceful. Hopefully the peaceful mentality will be perceived as achievable for other cities experiencing similar situations.

I’m proud of the way Chicago handled such a large problem. Only 5 protesters were arrested over the week. No one was injured. While we don’t know many of the straight facts, we do know this: the peacefulness of the Chicago protests was incredible. It’s something I, and I’m sure many others, hope to inspire in other cities that feel the need to speak out against injustice.