“She doesn’t want to take responsibility for her actions”

Classmates speak out about the arrest of Jaclyn Pazera 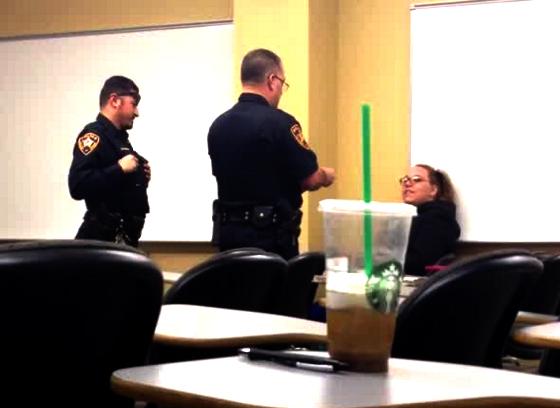 “Let me start by saying this. Jaclyn Pazera is a liar and a manipulator,” said Ethan Price, classmate of Pazera, and the only person to see the full chain of events that led to Pazera’s arrest on Dec. 7 2014.

Now, almost a full year later, Pazera has filed a lawsuit against James Tamburrino and Raul Valladares, the two College of DuPage officers who, according to Pazera, arrested her using excessive force.

The arrest was captured on video by Pazera’s ethics professor as well as another student, Amarelis Morales. Since filing the lawsuit on Nov. 6 of this year, the video has been featured nationally on news broadcasts and websites. Morales has released her video exclusively to the Courier. Her video can be found on our website.

While much of the college reacted with outrage at the release of Pazera’s arrest video, her classmates, including Price, had a different reaction.

According to the official police report, obtained by the Courier, the incident began when Valladares stopped Price, student Brandon Cahill and Pazera during a smoke break from their Sunday ethics class. Since 2012, COD has prohibited smoking anywhere on campus except in one’s vehicle.

Price and Cahill complied with the officer, showing identification and putting out their cigarettes when asked, and were allowed to return to class. Pazera refused to show identification or put out her cigarette. When Pazera began to walk away, Valladares ordered her to stop, to which she replied “No,” and continued into the building.

Valladares followed Pazara back into the building, Price following shortly behind. According to Price, once in the classroom, Valladares continued to ask Pazera for identification, explaining that without proving herself as a COD student, she would be arrested for trespassing. Valladares left the room to get additional assistance.

“Jaclyn was giving attitude to the police,” said Price. “He left to get back up, and when he left, Jaclyn started laughing. I said ‘You know you’re breaking the law. You can’t do whatever you want.’ She responded with something like ‘I can smoke wherever I want to,’ and the teacher even said, ‘No you can’t.’” The Courier reached out to Pazera’s teacher but was unable to make contact.

Price explained when Valladares returned with Tamburrino as back up, the two officers spent close to 15 minutes talking with Pazera, encouraging her to comply. Price said they gave her an opportunity to gather her things and go home before arresting her for trespassing.

“I saw the entire thing,” said Price. “The officer’s objective was to get her arm behind her back. She was resisting and wouldn’t do [what he said]. At one point, the officer said ‘get your left arm behind your back,’ and she responded with something like ‘that’s my right arm. The force they used could have been avoided if she did what they said,” said Price. The comment Price refers to can be heard in Morales’ video.

On the other hand, Pazera feels force used during the arrest was excessive. While she refused to comment further, Pazera explained her viewpoint to the Courier in email correspondence through her attorney, Blake Horwitz.

“Honestly I’m pretty sure everyone was freaked out. How would you feel coming back from a break to a classmate getting beat up by the people who are supposed to be keeping you safe?” said Pazera.

Pazera believes the situation should have been handled differently.

“They hurt me and repeatedly violated my Rights and Liberties,” said Pazera. “Physical harm on an individual is extremely unprofessional by anyone asserting authority. The golden rule I taught my class of 18 pre-kinders was ‘Treat others how you would like to be treated!’ What those fully grown men did to me was just wrong.”

Morales filed her own police report upon hearing of Pazera’s lawsuit. The report, obtained by the Courier, detailed feeling threatened by Pazera in a classroom setting on multiple occasions. Morales explained Pazera’s ability to verbally attack classmates during discussions, feeling her opinion was always the highest. Morales felt police did what was necessary to keep the classroom safe. Neither Morales nor Price felt the police used excessive force.

“I hope that these cops are treated fairly,” said Morales. “I said this in my report and will say it again, I am glad they were there to handle the situation. They did what they did for the safety of myself and the other students in our classroom. [Pazera] said in one interview she wanted them to lose their jobs; she has no right to say that about two men who were just doing their jobs and handled the situation responsibly.”

Price feels much of Pazera’s story is fabricated. According to published interviews with Pazera, she never returned to campus after the incident. Price believes this to be a lie, as he, as well as his classmates, saw her outside of their classroom just a week after the incident. The Courier also received an on-campus visit from Pazera last December.

Price also commented that a statement involving the threat of a taser gun was completely false. He feels that much of Pazera’s actions since the initiation of the incident have been nothing but posturing in order to preserve her reputation.

“Her motive [to sue] may be money, but before that, I think it’s her reputation,” said Price. “I think it’s she’s trying to prove she’s right by placing the blame on the police officers. She doesn’t want to take responsibility for her actions.”

Watching the video from an outside perspective, Price understands that the footage may look harsh. “Say I wasn’t in the classroom and I watched the video,” said Price. “They cut that video to make it look like the police walked into a classroom and took a girl to the floor. In the public’s eye, it looks like the police officers were using excessive force. When you take into account the fact that they talked to her for at least 15 minutes and told her to leave and go home, the way she was acting towards them plays a huge part.”

Morales feels Pazera was treated how she deserved, given the situation. “She was clearly too proud to follow the College of DuPage laws, and I think they treated her fairly,” said Morales. “They told her several times what they needed from her and what was happening, and she repeatedly said no and refused and mocked the cops.”

From his personal encounter with Valladares that day, Price feels Pazera’s situation did not need to escalate. “There’s a lot going on right now with police brutality,” said Price. “I don’t like cops, but this is one case, not because I dislike Jaclyn, but because I saw the whole thing, that I feel [the officers] did the right thing,” said Price. “They would have treated her like they treated me if she had just put her cigarette out.”