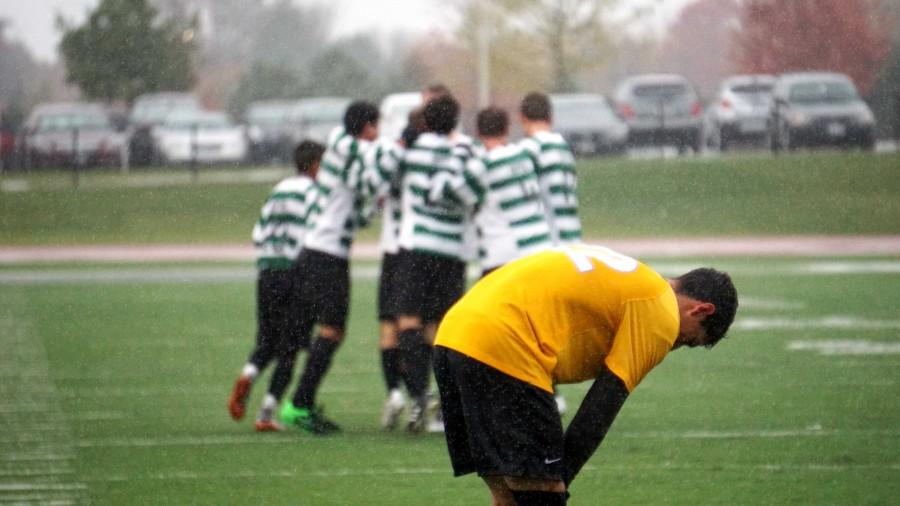 A group of Chaparral players celebrate after a goal at a game against McHenry County College at the College of DuPage.

The Chaparral Men’s soccer team fought long and hard on a miserable, rainy, cold Halloween afternoon to overcome the Regional Quarterfinal matchup against McHenry County College in a shootout. The end score was 1-1 after regulation, 5-4 after the shootout.

Although the Chaparrals played very hard on the slippery terrain, the team was sloppy and made many mistakes throughout the matchup by not following normal plays and procedure. According to Head Coach Jim Kelly, “They didn’t really follow instructions that well, so it was a tougher game than it should have been. If we play that way the next game, we’re not going to do well. They need to improve a lot after today’s performance.”

There were many times throughout the game where the Chaparrals gave up chances and even a goal due to misplays and losing their footing. If it wasn’t for the slippery terrain, McHenry County would have won this match based on their many deep chances that they failed to utilize. Late in the second half of the match, the Chaparral’s defense was unwieldy disorganized and flat-footed, which forced their goalie Eric Goode to fend for himself.

A McHenry forward crossed from the left side of the Chaparral goalie box to the center. Goode attempted to change his position to the center of the goal, but slipped and landed on his knee; which rendered him useless for the oncoming attack. Once the pass was completed, McHenry had the most open chance they could have had against the Chaparrals to be able to end the long standing tie. When the player shot the ball, it slipped off of his foot and curved high over the goal.

Although painful to watch the easiest scoring chance slip away, the referee’s performance was an even more painstaking view as he made mistake after mistake on many calls. Many times throughout the match, the referee called fouls and disrupted the flow of the match, underhandedly forcing the game to be unnecessarily long. Kelly was very displeased by the performance of referees, especially on calls that went against the normal officiating convention.

The referee, Juan Hernandez, made many mistakes such as that one against the Chaparrals. As well, the referee red carded Assistant Coach Gary Baker, for seemingly no reason. “The ref didn’t like how he was walking back towards the field,” said Kelly. “I think he thought he might have been a parent or a fan, and didn’t realize he was a coach coming back. When he shouted ‘Hey I’m a coach,’ the referee took offense to that, and said he didn’t show him any respect. I didn’t get that, but that’s why he did it.”

Although the match was a sloppy performance at best with a mediocre job by the officials, the important fact is that the Chaparrals continue their post-season battle towards their goal of being the Region IV Champions. On Wednesday, Nov. 4, the Chaparrals face Waubonsee Community College at home for their Regional Semi-Final match. If they win this, they go to the finals. If they win the championship, they head to the week-long NJCAA National Tournament in Martinsville, Virginia from Nov. 16 to Nov. 21.