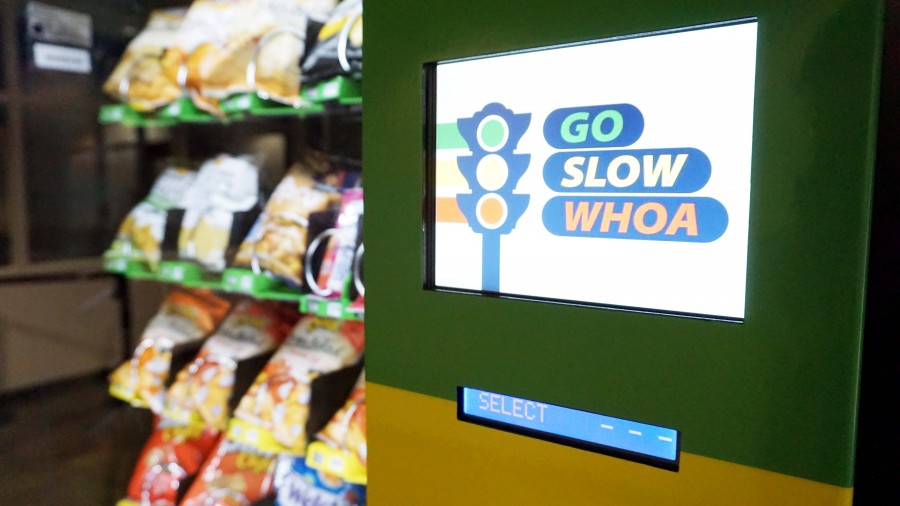 The Editorial Board
Reading Time: 2 minutes

America may only be ranked second in the world in obesity, but our false pride in unhealthy dietary habits is surely the greatest in the world. We take our junk food very seriously, which is why so many College of DuPage students were outraged and shocked by the new “Go! Slow! Whoa!” healthy vending machine initiative.

After spring break, the main campus was infiltrated by health-conscious vending machines, cleverly labeled “Go! Slow! Whoa!” to encourage students to think wisely about their eating habits. “Go!” refers to choosing a healthy food. “Slow!” means to eat said food at a good pace. “Whoa!” advises consumers not to choose the unhealthy food.

The machines still offer your standard vending machine items: chips, cookies, and gum, but also contain healthier options as well. The healthiest foods are placed on the top shelf marked with a green panel, then moderately healthy selections marked with a yellow panel, and at the very bottom, the least healthy options are marked with a red panel, causing one to feel shame when craving an item on the bottom shelf. In addition, all prices were raised to a standard $1.25 and 75 cents for a pack of gum. Students are literally paying more to be embarrassed about their choice of snack.

In the grand scheme of things, this isn’t even close to the worst thing to happen to the college this year. But for students, it’s a pretty big let down. Rushing between classes doesn’t leave time to go to the cafeteria or wait in line at Starbucks or Einstein Brothers Bagels. For some students, the vending machines are their only chance to get a much needed snack in between classes. While a slight increase in price doesn’t seem like much, the long run will prove otherwise. Students seem already outspoken against the new vending machines, and the message is clear: people don’t want to pay the same price for a bag of chips that they would for a granola bar.

In addition to unnecessarily jacked-up prices, the entire initiative seems a bit redundant. Even the healthiest vending machine option doesn’t compare to a salad or fresh fruit. Instead of pushing pseudo-nutritional snacks, the school should let the few students that actually want to eat healthy do so on their own with better products. The fact of the matter is that if students are looking to get food from a vending machine, they probably aren’t too concerned about the health benefits of their snack. They want cheap junk food that will tide them over until their next meal. The new vending machines encourage exactly the opposite. There’s a blurred line between the school providing healthy food choices, and forcing those healthy food choices. As of right now, it’s unclear as to where COD stands.

There is nothing wrong with COD wanting to give its students nutritional snacks. It’s actually fairly considerate. It also isn’t surprising that the new vending machines with healthy options have higher prices than the previous ones. However, the new vending machines need a bit of tweaking to say the least. Forcing students that want a cookie to not only feel shamed for not buying a granola bar, but also pay a higher price because it’s in the same machine as a granola bar, just doesn’t make sense. Instead of trying to convince a school full of adults to either eat healthy or overpay for junk food, COD should focus its efforts on making snacking easier for students. The last thing we need is a campus of angry, hungry students with no money left in their pockets.