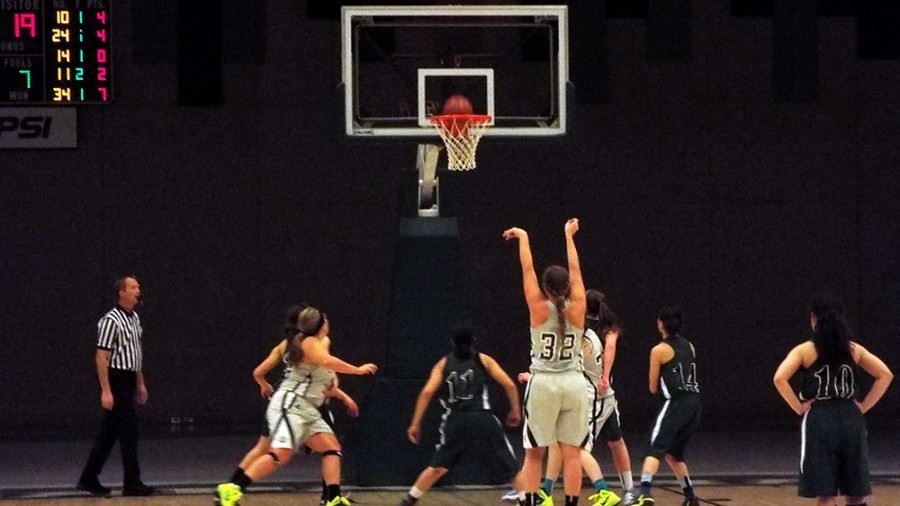 Lady Chaparral Colleen Honn, No. 32, making a free throw shot after a foul from Oaktons Jazlene Gonzalez, No. 11, on Nov. 8, 2014. In the fourth quarter of the game, Jazlene was fouled out after delivering her fifth foul in the last couple of minutes of the game.

College of DuPage’s women’s basketball team earned a 67-38 victory playing for the very first time this season against Oakton Community College. The tip-off was at 1 p.m., and from the very start of the game, the Chaparrals showed that they were ready to use the skills they have acquired during their time at practice against the opposing team.

Both teams played very aggressively, which translated into a high number of fouls and falls during the first half. Despite both teams playing very hard, the Chaparrals were able to maintain a decisive control over the ball during the game. This aided in giving the Chaparrals many opportunities to make shots at the right times, and also collect rebounds when needed.

As the game progressed, there were a lot of instances where COD players had toppled over due to the rough playing of Oakton. This was especially true for sophomore Breanna Venson, who was constantly being shoved down after making attempts at scoring. However, this did not prohibit her from being the second highest point-earner for COD.

Oakton had continuous trouble with the Chaparral’s defense during the first half, and was only able to have a 35.5 percent two-point ratio and also missing both three point attempts. The first half ended with the Lady Chaparrals in the lead 39-23.

Coming back from the first half, Oakton began to play with a different style, which didn’t last long, and they soon turned back to continuously fouling even more of COD’s players.

Despite the rejuvenated playing style of Oakton, there was still a low percentage of shots made when compared to the Chaparrals. Okaton had made multiple three-point attempts, which proved to hurt them in the long-run because the Chaparrals were able to quickly get back the rebounds. On top of the unsuccessful three-point attempts, Oakton’s shooting percentage was only at 17.6 percent in the second half, which made it very comforting for the Chaparrals seeing that their defense was incapacitating Oakton’s offense.

For the rest of the game, the lady Chaparrals had an easy time controlling their position on the scoreboard, and looked happy with their performance.

Women’s basketball coach Ryan Connell remarked on the team’s first game.and this showed how important it can be.

“It was a good first game, the girls came out ready play, and that showed today. They took advantage of when they needed to make important plays, and it showed on the board.”

The Chaparrals will face off next against Morton Community College on Nov. 15.