Immigration advocates: If ICE is coming for you, then we’re coming for ICE 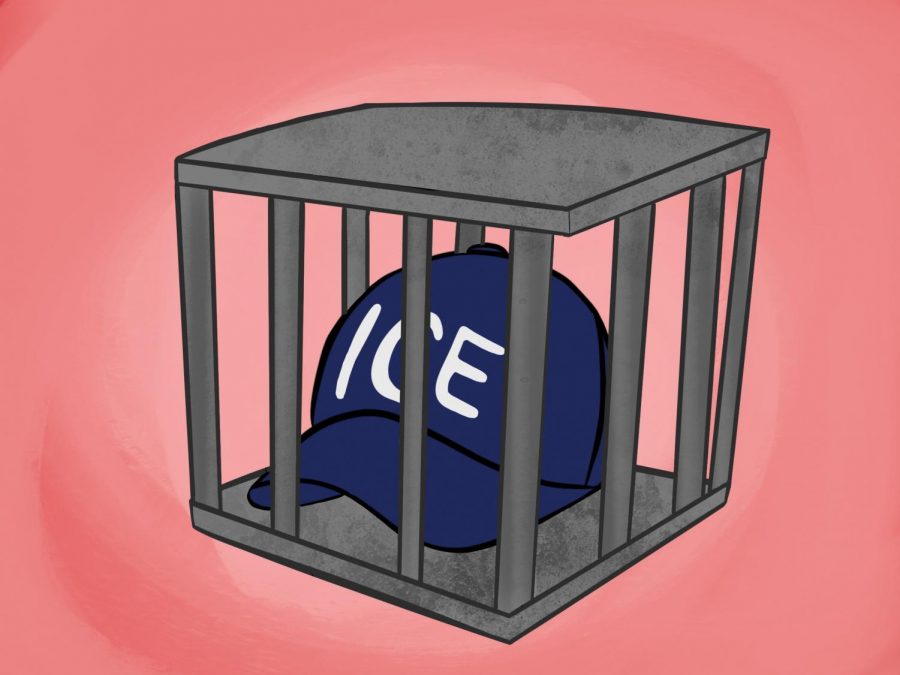 All it took was missing one court date for Meydi Guzman Rivas, a Crystal Lake High School senior and Honduran native to find herself and her father arrested by Immigration and Customs Enforcement agents and locked behind bars for four months.

Even with Illinois’ “sanctuary” status preventing local law enforcement from cooperating with ICE, arrests and lengthy detentions like hers are all too common. Seeking asylum in the United States from sexual gang violence in Honduras, a GoFundMe drive was needed to raise Rivas’ required $2,000 bond release.

While supporters believe ICE keeps our communities safe from dangerous, criminal immigrants, those affected see ICE as a terrorizing group using fear and intimidation to separate families and divide communities.

“As a community organization, we are very aware of the panic threats like ICE and the tactical units create,” said Cervantes. “When raids happen, communities turn to ghost towns. If these tactical units are deployed, we will mobilize our watch groups to help keep people safe.”

Cervantes relates to Rivas’ fear of deportation. As a DACA recipient, she lives with the anxiety of changing policies. Concern for her and her family’s safety is what helped inspire her towards advocacy.

“When I was in school, it was terrifying driving without a license,” said Cervantes. “Once, I slightly bumped another car and was scared I was about to be deported to Mexico. People live every day scared while driving to work or taking their children to school. There’s no dignity living with this constant fear. Children are raised under this anxiety, creating insecurity and damaging our communities.

“Many families are mixed-status; often with one parent a citizen and the other undocumented or a legal permanent resident,” continued Cervantes. “Through our organization, I see our community’s incredible resilience. People are finding a way to survive, but human dignity is not about just surviving, it’s about having full-access to liberty. We need to confront the narrative immigrants are criminals. With the (Trump) administration making every immigrant a target, you never know what could happen.”

Cervantes said a misconception is nothing can go wrong in a sanctuary. Organizations like hers have worked for years closing loopholes regarding law enforcement and ICE collaboration. This included helping legalize access to temporary driver’s licenses.

SSIP co-founder, Jose Vera, a former College of DuPage student, said most people don’t realize ICE has only been around since 2003. Vera is also a DACA recipient.

“Our organizational stance is to abolish ICE,” said Vera. “An agency that undermines human dignity, thrives and profits from family separation has no place in our communities. When some people hear ‘abolish’ they get scared thinking we’re trying to abolish borders or local law enforcement. We’re not addressing borders; that’s a separate issue. Abolishing ICE is about interior enforcement. Local law enforcement already handles civil matters. We’ve already lived in a nation without ICE, and we can again.”

Vera said most ICE arrests are done without a judicial warrant.

“Often if they obtain a judicial warrant for someone specific, they detain other people they come across in what we call ‘collateral damage.’ In 2018, there were raids across Chicagoland and more than half the arrests were conducted warrantless. People can argue ICE only arrests criminals, but to ICE, the fact an immigrant is the country undocumented could deem them a criminal.”

Cristobal Cavazos, co-founder of Immigrant Solidarity DuPage, said his organization features a Rapid Response app to help community members rush to the aid of people being threatened by ICE.

“Raids are traumatizing experiences, as we saw in St. Charles in May 2018, when heavily militarized agents raided restaurant kitchens, grabbing any Latino they could reach, tackling them, chasing and throwing them to the floor, taking several fathers from their families,” said Cavazos. “Our Rapid Response Network allows community members to rush to the scene and help disrupt the raid. ICE prefers to operate fast and secret; they don’t take into account there may be a large community waiting to protest them during their attempted raid.”

Cavazos said ICE should be abolished and people should recognize the positive effect immigrants have on society.

“Any decent society would legalize the nation’s 12 million (undocumented) immigrants, including thousands of workers in DuPage who contribute to our economy,” said Cavazos. “Immigrants who can’t vote are perfect scapegoats, but the reality is crime statistics are much lower for undocumented immigrants than the general population.”

Immigration attorney Rocio Becerril, also a former COD student, said it doesn’t matter if you have no criminal record or are a straight-A student. If you’re undocumented, ICE puts you at risk of deportation.

“ICE shouldn’t exist; they’re just tearing families apart,” said Becerril. “It’s horrible what they do to people in our communities. There has to be a better way than enforcing through fear and intimidation. One of my clients forgot to use a turning signal, and police gave him a ticket and turned him over to ICE. He was a father. If you’re stuck in detention, you often lose employment. The mother had to take care of the entire family. It has a ripple effect, financially and psychologically for the spouse and the children.”

“We are lucky to have this protection Gov. (J.B.) Pritzker signed into law designating the entire state a sanctuary,” said Becerril. “If I’m undocumented, I don’t have to fear risk of deportation over forgetting to use a turn signal. I used to see DACA clients who would go to traffic court in Waukegan with ICE waiting outside the door. The intimidation from ICE was constant.”

The Trump Administration threatened to withhold millions of dollars in law enforcement grants in retaliation for local governments declaring sanctuary status. Federal appeals courts have ruled both for and against the legality of the administration’s threat, most currently ruling in Trump’s favor.

Immigration courts have proposed raising the fee for appealing an immigration judge’s ruling from $110 to $975.

“I see mothers and fathers kept away from their children because they can’t afford the high bonds set by immigration court,” said Becerril. “In criminal court, you only pay a percentage of the bond. In immigration court, you often see bonds of $12,000, and you’re required to pay the full amount. People eligible for bond are still being detained because most of my clients don’t have that kind of money sitting around. This is compounded because, unlike criminal court, where a public defender is provided if you can’t afford an attorney, immigration court doesn’t provide free legal representation by the government. You can request an attorney, but then your family pays out of pocket. Many go unrepresented because they lack money for an attorney.”

Becerril said success dramatically improves with representation. To manage the massive backlog of cases, which can include wait times of months or even over a year, some courts have issued quotas to the number of people judges will see. Becerril said greater access to attorneys will expedite the complicated immigration system and prevent the current breakdowns we see such as indefinite detention. There is currently only one immigration court to handle most people in the entire state. Becerril said more judges and courthouses are needed to prevent massive delays.

Vera said the absurdity in lack of representation goes as far as the Supreme Court saying a 2-year-old is competent enough to represent herself in immigration court. Cervantes said their organization works to help community members understand their right to legal representation and their rights if confronted by ICE.

“ICE isn’t likely to be abolished soon. So at the congressional level we’re pushing for oversight,” said Cervantes. “ICE receives massive appropriations, but unlike other law enforcement agencies receiving money and reporting on its spending, ICE essentially supervises itself.”

Becerril advises clients to not open their door unless ICE has a warrant signed by a judge. She tells them to have the agent slide the warrant under the door because opening the door gives them consent to enter. Closely inspect all data to make sure there are no errors. An administrative order of expulsion from immigration authorities is not enough for your arrest.

Becerril said the challenging part of being an immigration attorney is the law constantly changing.

The Trump Administration ordered immigration to become merit-based, excluding poorer people who would use public benefits. According to the N.Y. Times, two-thirds of immigrants who obtained permanent legal status from 2012-2016 would have been denied green cards under the new public charge rule.

“Almost all of my clients are here to work; they’re not looking for public handouts,” said Becerril. “They’re often working two jobs just to provide a better life for their family. Many people don’t understand the basics of the immigration process. If I’m a U.S. citizen, and I want to bring a family member from Mexico, the legal wait period is at least 20 years. One of my clients just got her visa approved after five years of waiting. She could have been detained by ICE during that period.

“Attorneys see the system is designed against immigrants,” continued Becerril. “People are often clueless when applying for asylum because nobody’s present to guide them. If you forget one minor detail, like labeling ‘not applicable,’ your entire application will be rejected. The new public charge forms are 18-pages long. What happens if the Supreme Court cancels DACA this summer?”

Cervantes said people should never feel powerless in making differences in the lives of those around them. Their organization offers citizenship workshops to help immigrants fill out their applications and study for their civics test. They also need volunteers to ensure everyone is counted in the census as part of their initiative to fight voter suppression.

Vera said COD students, with their sizable DACA and immigrant community, have a responsibility to ensure the school dissociates itself from politicians who espouse views that harm students’ safety.

“DuPage’s new sheriff, (James) Mendrick, campaigned on anti-immigrant sentiment to gather support,” said Vera. “The sheriff posts a lot of fundraisers for (former State Rep.) Jeanne Ives, who should never have been involved in COD’s presidential search committee. We see Ives as the most vocal anti-immigrant politician in Illinois. She poses a danger to our diverse district.”

Cervantes, who like Vera first became involved in advocacy as a college student, said students should recognize their true power.

“This is an opportunity for COD students to organize,” said Cervantes. “Students should talk to administrators regarding the school’s stance on immigration. Students should know where every political candidate stands on immigration. When students claim the right to make their schools a safe place for all members, and become active members in their communities, they help move all society forward.”