A Great Play but an Even Better Experience 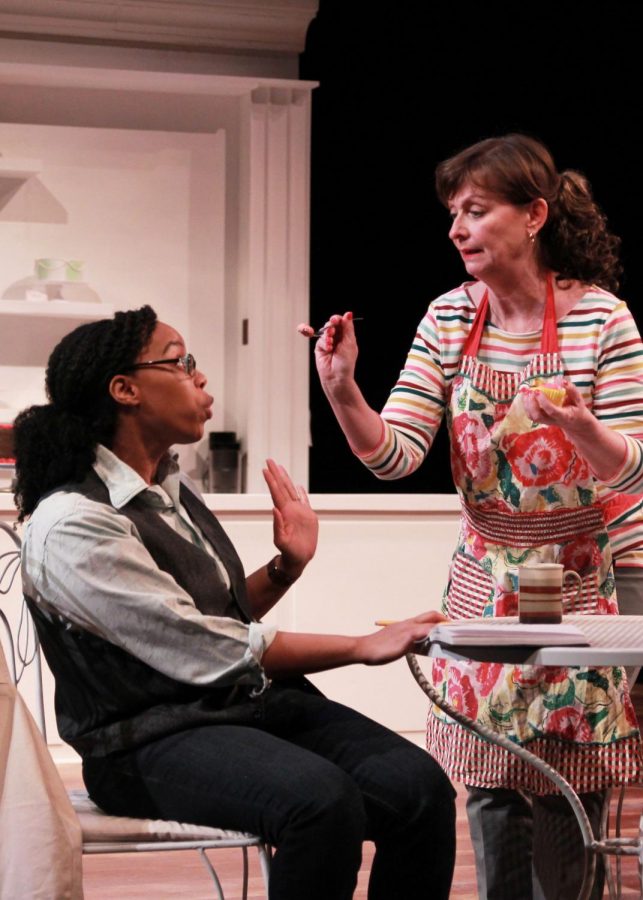 “The Cake” by Bekah Brunsetter, the writer of NBC’s show “This Is Us,” is being presented by the Buffalo Theatre Ensemble until Mar. 1. The comedic yet tear-jerking play is a great story showing the struggles of balancing social norms with personal religious beliefs.

Some COD students who have taken acting courses at the college were welcomed to shadow the actors and tech crew giving them first-hand experience working with the production of a live performance. Isabelle Jones was selected to shadow Lisa Dawn who played Jen.

“It’s about a woman named Della (Connie Canaday Howard) who owns a bakery in North Carolina,” Jones said. “Jen (Lisa Dawn), who has been like a surrogate daughter to her because she is her best friend’s daughter, comes into the shop and wants Della to make her wedding cake and then tells Della she is marrying a woman. And Della, having Christian values, says that she’s busy but it’s pretty clear that she’s saying no because she’s uncomfortable.

“It’s Della’s journey with her faith and also with this new set of values that society holds now and trying to reconcile the two of them together. Jen also has a little bit of those values because she was raised in North Carolina, but now she lives in Brooklyn, and it’s a clashing of the two worlds. Jen talks a little bit about how she feels like she is of two minds all the time because she’s got these values that she was raised with, and she also knows who she is, and they necessarily go together.”

“The Cake” does an amazing job remaining respectful to each side of the story when talking about sensitive topics. Although gay marriage has been legal in the United States for many years now, people are still learning how their values and beliefs align with society’s. The play shows a realistic version of people who have different opinions but still love each other and how they adapt to the world changing around them.

“I don’t think I’ve ever seen a show that shows both sides of the story as well as this show has,” Maravilla said. “We are to see and understand Della’s choices and the anguish she goes through making them. However, we also see both Jen and Macy’s side of the story and why they made them.”

The Buffalo Theatre Ensemble and Connie Canaday Howard, who is the chair of the Theatre

Department at COD, were able to request students who have taken acting courses at COD to join the ensemble in production. Students were shadow actors, a unique experience for students like Maravilla.

“The shadow program is a program through the COD theater department that gives student actors the opportunity to learn from theater professionals by “shadowing” them,” Maravilla said. “We are with our actors from the first rehearsal to the final performance watching their process, asking them questions about how they interpret their character, etc.”

Christopher Yee is another COD student who is running the light board for the show. Yee controls all the lights during the show. The bulk of Yee’s job is communicating with the stage manager to ensure that all of the lighting changes are occurring at the right times.

Jones and Maravilla also had a very strong appreciation for the experience they received working with the ensemble.

“Getting to be a part of the experience once they picked it was just like a dream come true,” Jones said. “I read the script before I was asked to shadow. Every word that comes out of Jen’s mouth feels like I wrote it down. It feels like it’s coming directly from my brain… And just the shadowing experience in general like Lisa Dawn is a fantastic actress and I love her take on his character and so learning from her has been really great too.”

Tickets are on sale at the MAC box office or online at www.atthemac.org. Shows are every Thursday-Sunday now until Mar. 1 and tickets cost $42 per adult.