Athlete of the Week: Khyre Hines #5 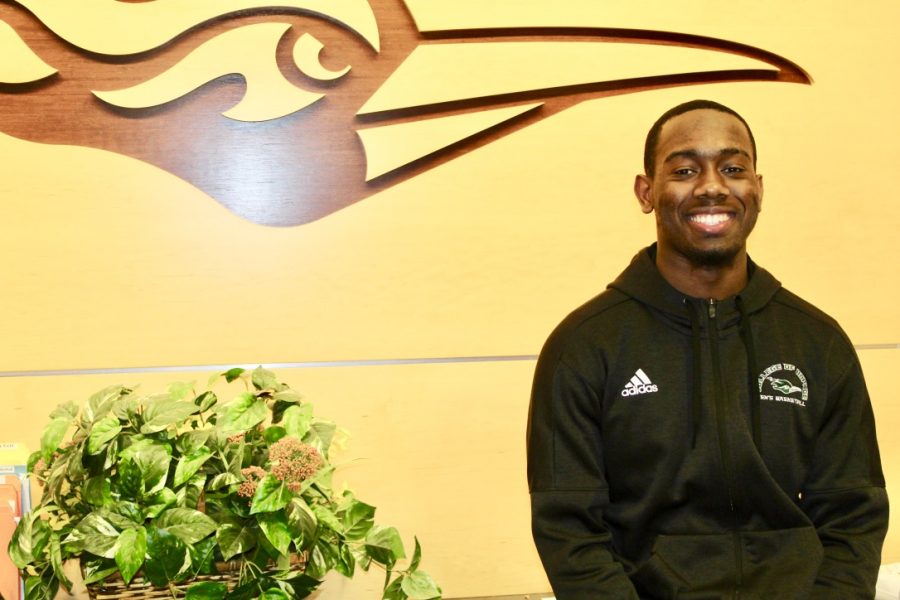 Basketball player and student, Khrye Hines, poses to get his photo taken as Athlete of the Week

KZ: When did you get started playing basketball and do you remember those first memories?

KH: I started playing when I was 5. It was me and my godbrother, Justin. We were playing at my grandma’s house in the backyard. We were shooting a ball into this crate on the gate, and the very next day my grandma bought me a hoop. After I saw that hoop it was like love at first sight, and from then on we were outside playing sunrise to sundown. It was crazy she did that. I wasn’t expecting that.

KZ: How do you think the team will do this season?

KH: I am really looking forward to this season. We’re pumped because, you know, last year we couldn’t play because of the probation. So, this year we are more than ready.

KZ: When did you decide to come to COD, and what are some of your goals?

KH: My freshman year, which was last year, Coach William Anderson came to talk to me after a sectional game. He visited my grandma’s house, and we talked and started to form a relationship. After that, I told him I wanted to come and play, and I ended up coming here that summer. I hope to continue to play. With college, my goal is to get my degree probably in sociology and become a teacher or something like that.

KZ: If this is your last semester here at COD, where do you see yourself going in the future?

KH: I am not sure yet, but I want to be somewhere warm, not cold. I’m tired of the snow and defrosting my car.

KZ: How does being an athlete make you a better person, and what keeps you motivated?

KH: Being an athlete makes me think about my decisions more, I think, because I have two younger brothers who are 15 years old (they’re twins), and I’ve noticed a lot of the things I am doing they try to mimic, even on social media. So I’ve got to be clean all the way around, for them. Also, my aunt passed away and never got to see me play. So I just usually try to play for her. I have her tattooed on my arm.

KZ: What are some of your rituals before a game?

KH: I wake up early, and I’ll watch highlights of stuff I did last game or watch the other team’s (highlights). I like oatmeal. I’ll have some breakfast or some fruit, stretch and listen to a lot of music. Maybe have a sandwich.

KZ: What are some of the emotions you feel when you play, and what mental tools do you use when you’re under pressure?

KH: I’m never nervous.t’s just more that my adrenaline is pumping a lot. So, I am usually moving faster in my head than I am physically. I play with a lot of heart. I have no fear out there (on the court), of anybody and (I’ll take) deep breath(s). I have a purpose, and I know what I want to do. So I just act on that.

KZ: Do you have any favorite quotes?

KH: Coach Anderson says, “Be humble before you stumble.”

KH: Probably my uncle. His name is Luis. He is a Pastor, and he is my role model. So, I try to model after him to stay on the right path.

KZ: Who are some of your role models in sports?

KH: Lebron James because he is positive off the court and on the court. I want to be like that as I get older, always looking out for other people. He even opened up an elementary school for at-risk children in his hometown of Akron, Ohio. Helping those less fortunate is pretty cool.

KZ: What classes and do you feel you couldn’t have lived without here at COD?

KH: Right now, Ethics. I’m pretty shy and I feel like this class is helping me to come out of my shell a bit, and it makes me think about everything.