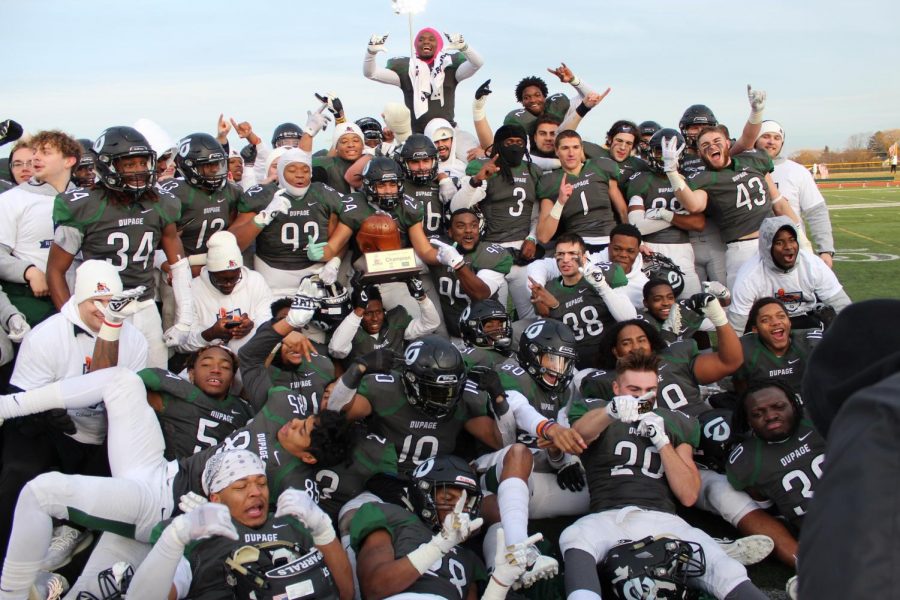 The College of DuPage football team triumphantly completed their season defeating Itasca Community College (Minn.) 14-0 in the Red Grange Bowl at Bjarne Ullsvik Stadium. The Chaps finished the season with a 8-4 winning record. The leather helmet Red Grange Bowl trophy was awarded to the victorious players.

COD President Brain Caputo was among the many fans to witness the win.

“This has been a great season for the Chaparrals,” said Caputo. “They have won seven out of the last eight [games], and came out really strong. I’m very proud of all their work. They have represented the college extremely well. The defense did an awesome job (with their) really great stops close to the goal line.”

Offensive lineman Max Schumann (#64) basked in the Chap’s victory after the game.

“I think the defense played their best game all year,” said Schumann. “It was a hard fought win that we should be proud of.”

After the game, players rejoiced in their season-long accomplishment.

“It was a good game to experience,” said running back Darrell Smith (#5). “I loved how both teams came together to say a prayer for our brother Angelo. It was great sportsmanship both teams showed. My teammates played their tails off. I Love those guys; we made our coaches happy.”

Linebacker Nate Clark (#43) was impressed by their defensive performance.

“The defense played lights out,” said Clark. “We were put in a lot of tough situations, and came out ready to put up a stop. We always say, ‘bend, don’t break.’ We really put that to the test and stayed true. I’m really proud of all the guys.”

In the game’s fourth quarter, offensive lineman Angelo Redden (#76) suffered a dislocated ankle. Paramedics rushed to the scene to take Redden to a hospital to receive immediate surgery.

Coach Dean Pauley expressed how proud he was of all his brave players.

“I’m really proud of the way the guys kept battling all game long no matter what adversity happened during the game,” said Pauley. It was a great way to end the season for these guys.”

“The opposing team had some serious talent at running back (top in the nation) and their receiver was also a threat (top in the nation),” said Miller. “COD’s defense played a great game shutting Itasca out. Anthony Fordham played a good game with multiple pass deflections and an interception. Christian Wills was a problem for Itasca’s offensive line. Ethan Perkins, a true freshman, got a late interception. It’s awesome to see guys like that make plays.”

“Our offense had a good game as well, with 300+ rushing yards,” continued Miller. “The credit goes to our three running backs, Lavale Hill, Darrell Smith and Isaiah Nwokenkwo. Our offensive linemen, Max Schumann, Kerry Reynolds, Josh Weichel, Angelo Redden and John Kowalski (also played great.) Also, our two other quarterbacks did well controlling the pace of the game and putting points on the board for a great team win!”