Behind the Blue Man: Blue Man Group continues its legacy in Chicago 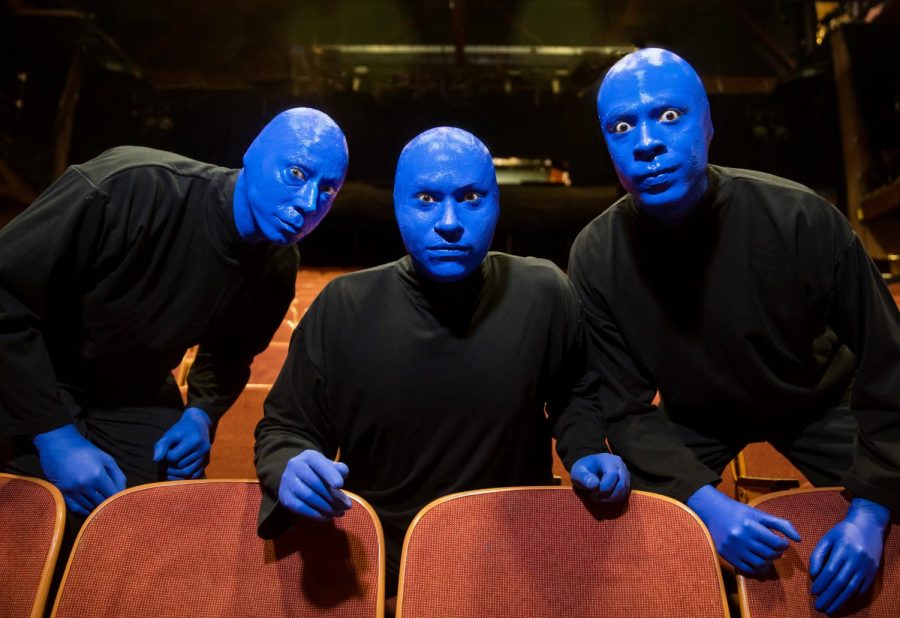 With no blue paint or Twinkies in sight, you may never guess cast members Jeff Quay  and Tom Galassi had just finished the final 90-minute Blue Man Group performance of the night. In just a matter of minutes, the two were able to clean off their blue-and-neon doused complections and join the final mesmerized audience members.

If you happened to see Quay, the associate music director and Galassi, the Chicago Blue Man captain, on the street, chances are no one would have an idea of what they do five times a week, not including the four shows per day during the holidays. Galassi says that one of the perks of the gig are being able to perform, then be completely unknown without the blue paint on.

“When we’ve done outside gigs or things like red carpets, for big events or something when [we felt what it] feels like to be an actual celebrity, it wasn’t cool. Like, we would just be let loose. We performed for the Queen of England, and Ozzie Osborn was there and all this crazy stuff was happening and people reaching for you, and we’re like ‘oh take it off, nobody cares,’” Galassi said.

The show, which has been running for almost 28 years, has developed a cult following. The show debuted at the Astor Place Theatre in New York in 1991 and was created by Chris Wink, Phil Stanton and Matt Goldman.

Today, the show has been updated to appeal to a world audience, with topics such as relationships to technology, but still keeps its roots with references to the art world.

“Back in the early days, so much of our influences and our references were about the art world and about the New York art world scene,” Quay said. “So much of what we were doing was questioning what art is, calling into question the validity of art. You still see it, when the Blue Men are catching stuff in their mouths and making that painting. “That’s still kind of a holdover, and they make the sculpture at the end out of the goop in their mouths and put a $5,000 sign on it. That’s kind of referencing the old school days of art, and that’s the world the three original creators of Blue Man came from.”

Since its debut, it has become a pop culture phenomenon. The performance has been featured on TV shows such as “Dancing with the Stars,” “Arrested Development” and “The Tonight Show.” According to a press release, over 35 million people have experienced Blue Man Group.

Rather than having a generic band or pit orchestra, the Blue Man Group strives to leave audience members with questions while creating a nearly unrealistic experience. The band, covered in bright electric paint, is set in the upper right corner of the stage and features one-of-a-kind instruments. They think of themselves almost as “Electric Shaman.”

“I play the drum kit, which has a whole bunch of sound effects, symbols and metal objects,” Quay said. “The musician in the middle plays the Chapman stick, which is like a 2-by-4 with 10 strings on it. In the beginning of the show he also plays talking drum. The guy on the far right of the band plays the electric zither, which is like a big board with 90 or so strings on it, and he plays it with picks,” Quay said.

“I think we try to make all the shows different, as different from each other as we can,” Galassi said. “That’s the long term goal. I think they used to be mostly similar. In fact, I could go to Boston and just do the show, or go to Vegas and do the show, and now, you can’t really do that. You have to train, study a lot. I think we wanted it to be like if you’re in a different town, and you’ve already seen Blue Man in Chicago, you can be like, ‘oh, it’s different here. Let’s go here and see it again.”

Cast members strive for honesty in their performances.

“We’ve done so many shows, like thousands, and after a while, after many, many years it becomes about being able to deliver honesty every night so that we’re not phoning it in,” Quay said. “If I come to work, and I have a lot of stuff going on in my life, or I’m physically tired, or physically hurting or something, all I have to do is think about it from a new audience perspective and I think what we are doing is kind of healing. What we are doing within the entertainment world, I think we are doing something really helpful. It’s not divisive, and on a good night it really makes people feel good about it.”