How to save a life: DuPage Narcan Program training against opioid overdose 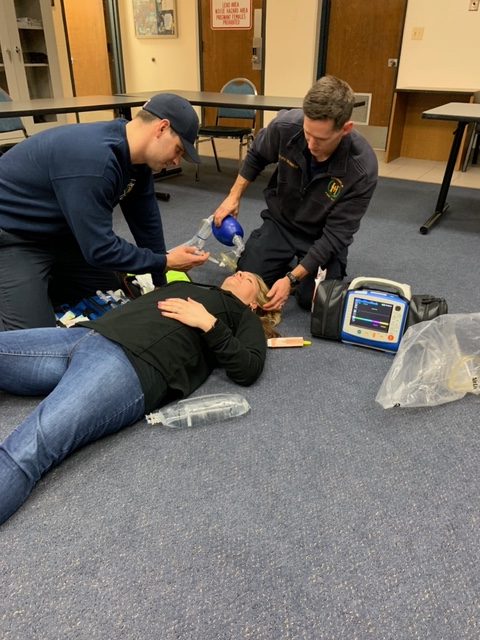 “Joe had been clean for over two years. I felt lucky to have seen him happy, healthy, smiling and making jokes like his old self. It never crossed my mind that I would never see him again.

“Joe’s passing shocked and stunned everyone. It didn’t seem real for a very long time. He was kind-hearted and loved by all who met him. It’s easy to think this will never happen to me, or someone I love, but it happens every day.”

College of DuPage student Jennifer Kurz believes if the opioid overdose antidote naloxone had been more widely available, countless lives, like her long-time friend’s, could have possibly been saved.

“Knowing there is any small chance to save yours, or another family’s loved one, how can you not want to help,” said Kurz. “Addiction is a lifelong battle; an overdose can happen anywhere at any time. People should be trained and ready to use Narcan [brand-named naloxone nasal spray] in businesses, bars, nightclubs, and especially schools. You never know when you might need to save a life.”

The sessions will train community members to recognize signs and symptoms of an overdose, how to administer Narcan and how to properly utilize community resources for opioid addiction and recovery. Future community training sessions are posted at hopedupage.org.

Project Director Mila Tsagalis, of the DuPage County Health Department, believes it is crucial to reach out to all students including those whose lives have been touched by the opioid crisis, and those who have been spared. The majority of people who have been revived by the Narcan Program are in the 19-29 age-group.

“This is a hard group for medical professionals to reach out to. It’s good to know the COD police carry naloxone, but students need to be trained as well. Whether in parking lots and vehicles, out on the streets or at home, you never know when split-decision action is needed.”

The events are funded by the Illinois Department of Human Services, Division of Substance Use Prevention and Recovery.

Rabia Mukhtar, Community Initiatives Coordinator for the DCHD, believes because of awareness people are willing to talk more openly and act towards ending the epidemic. While national deaths have surged, she attributed the DuPage Narcan Program for keeping county fatalities relatively stable during the past three years.

“If we did not have the Narcan Program in place, all the saves we recorded could have been potential deaths,” said Mukhtar. “The deaths have plateaued, and we hope they will decrease this year with all the support we have in the community and from our first-responders.”

According to the CDC, drug overdoses killed 63,632 Americans in 2016 alone. This was a single-year increase of 21.5 percent. Two-thirds of these deaths involved opioids. To put the number in perspective, 47,000 American soldiers died in the entirety of the decade-long Vietnam War.

The sharp increase in deaths across all geographic regions and all race and ethnicities has been attributed to the overabundance of prescribed pain-killing medication and the illicit use of synthetic fentanyl [the extremely potent drug that killed Prince], which is often combined with other drugs. The opioid crisis has resulted in the unprecedented second straight year of life expectancy declining in the U.S.

In July 2013, after seeing a corpse a day for two weeks due to heroin overdoses, DuPage Coroner Richard Jorgensen assembled the health department and chiefs of police to replicate a Boston program involving community outreach.

When the DuPage Narcan Program began in 2014, there were 33 recorded deaths due to heroin and 32 lives saved using Narcan. Since then, saves and overdoses have steadily increased. In 2018, 176 lives were saved, while 98 more overdose deaths were recorded [17 to heroin alone, 30 to fentanyl, 34 to a mixture of heroin and fentanyl, 17 to opioid prescription medication]. Three-quarters of the overdoses were male. 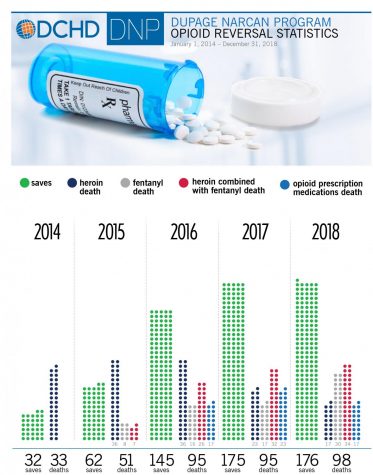 Tsagalis said Narcan serves as an antagonist for opioids, blocking them from working and preventing further brain damage. However, she stressed Narcan’s block doesn’t last more than 40-60 minutes. A call to 911 is crucial for saving the person’s life. Paramedics might need to administer another dose in the box to bring somebody back.

Tsagalis said the 911 Good Samaritan Law prevents people from getting in trouble for seeking medical help. If you have a concern about a family member, a friend or yourself, Narcan and many other naloxone products are available at pharmacies without a prescription due to a statewide standing order.

“Typically, Narcan has no adverse effects of usage, so people shouldn’t be afraid to use it,” said Tsagalis. “The antidote should be seen as like the life-saving tool EpiPen, just a normal device that will give a person another chance at life.”

She said the training sessions focus on recognizing the signs and symptoms of an overdose. Time is crucial as slowed breathing may stop altogether, eventually leading to brain damage and death. Signs include a person being unresponsive to voice or touch, with slow, irregular, or stopped breathing. The eyes will have pinpoint-sized pupils, with the fingernails and lips appearing blue or purple. The person will also appear pale, with clammy skin and a slow heartbeat and low blood pressure.

She believes the training is vital to both students who may eventually work in the healthcare industry and those who just want to help make the world a safer place.

Tsagalis said a federal funding grant provided by the Comprehensive Addiction and Recovery Act, enable them to expand the state’s first county-wide program into other counties and communities that don’t offer a program. The program is available to all police and fire departments in the county.

Tsagalis has been involved with other programs, like RX Boxes, to dispose painkillers and empty the medicine cabinet of opioids that could lead to misuse and a dependency problem.

Last year, 11 million Americans misused opioid pain relievers. In 2016, 66.5 opioid prescriptions were written per 100 citizens. According to the National Safety Council, misuse puts people at 40 times greater risk for transitioning to heroin. Illinois’ use of a state-run database to monitor prescribing to high-risk individuals has declined prescriptions by 10.6 percent. However, the NSC still judged Illinois as among the 30 states “lagging” in combating the opioid crisis by failing to mandate prescriber education and implement prescribing guidelines.

Tsagalis has been inspired by community efforts to organize events and fundraisers to build awareness and often help fund recovery efforts.

“In the beginning, people were concerned that an overdose was brought on by people’s drug use and is their own fault,” said Tsagalis. “They fear if you provide Narcan, people will feel free to overdose again. However, without Narcan you don’t have the chance to save them and give them another chance at recovery.

“We hear from people who have used Narcan to save someone. We also hear from police departments when Narcan was used prior to their arrival. People need to be courageous to discuss this issue, contact their family or seek treatment. If we fail to communicate with each other and treat the opioid crisis as a medical condition, the cycle will continue.”

FROM THE SCENE OF THE CRISIS

“Time after time, parents have had to give mouth to mouth and administer CPR to their own child after they found them blue and unresponsive from an overdose,” said Jared Skibbins of the Hinsdale Fire Department. “Sometimes they are successful in reviving their loved one, and sometimes they are not. No parent should have to go through that with their child. If they had Narcan, no doubt would it have saved many of these lives.”

“The DuPage Narcan Program is crucial because it (enlightens) community residents how far-reaching and pervasive the (crisis) is,” said Skibbins. “(The training) provides something tangible they can do to combat the problem by teaching about Narcan and how to use it.”

Skibbins said he was surprised to learn how unaware many in the community still are of the epidemic. He believes many are in denial and fail to realize it affects every race, age, ethnicity, gender and socioeconomic class.

“We are not just seeing teens overdose; we see mothers and fathers, people with new families and affluent members of the community. Hopefully with awareness and training, we can (help) prevent it from getting to this point.

Skibbins said the fire department carries Narcan on the ambulance and can administer the drug whether they are an EMT or paramedic. Currently, paramedics are allowed to give anywhere from 1-12mg of Narcan depending on the route of administration and the patient’s respiratory rate. He said the police also carry Narcan and undergo annual training on signs and symptoms of an overdose and how to administer the drug.

Skibbins believes constant vigilance and action by all members of the community is the only way to combat the crisis.

“As a medic, we try to educate people on the best practices for handling acute and chronic pain, instead of immediately getting a prescription for opioids,” said Skibbins. “(We) educate caregivers to not over-medicate their patient and recognize an overdose. (We need awareness) of addiction related to youth sports injuries and resources families (can use) for injuries that require opioids to treat. We see many young kids that overdose after getting a sports injuring leading to getting hooked on pain medication.”

Skibbins believes we must improve overdose treatment and social programs available to addicts. We must treat addiction as a medical crisis and a disease just like any other. Addicts should be treated with respect and counseling and social services should be provided to anyone in need.